Homeless man begs for job, not dole – and lands offers from tech giants!

A homeless guy standing with a placard in San Francisco’s Bay Area went viral this weekend – because he wasn’t asking for charity, but handing out resumes in the hope of a job. 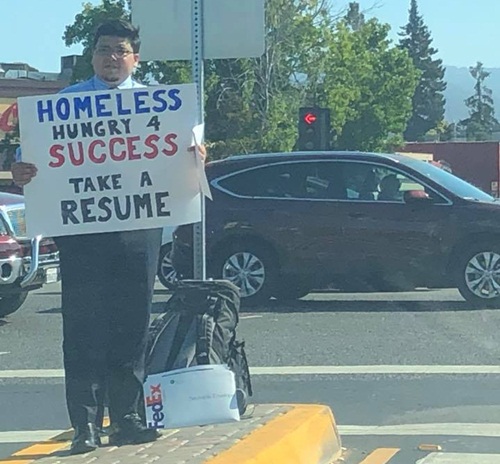 Web developer David Casarez, 26, held a sign saying, “Homeless, hungry 4 success, take a resume.” A woman who saw him took a picture of him and another of his resume, and posted it on Twitter.
Since then, Casrez has reportedly been flooded with over 200 job offers, including from tech giants like Google, Netflix and LinkedIn.
Casarez told TV channel NBC Bay Area that he had moved to the region last September wanting to launch a startup. The Texas A&M University graduate has worked since 2014, becoming a web developer in 2016, according to his resume.
But the cost of living near Silicon Valley and the difficulty of landing a job quickly drove Casarez to live in his van. He then lost the van because he couldn’t pay for it, and is now living in a park.
“All I wanted was for one person to notice, take my resume and give me an opportunity,” Casarez said. “This is my make or break moment. I have to do something crazy.”
Casarez said he has been approached by several companies in the Bay Area and other places since the woman’s post blew up on Twitter.
According to KNTV, Casarez fell on hard times when funding for that company ran out in June and his van was repossessed. He ended up sleeping on a park bench.
On Friday, he put on his best suit and stood on a highway median holding his now famous sign.
The sign caught the attention of passerby, Jasmine Scofield, who took to Twitter, posting a photo of Casarez and his resume.
“Today I saw this young homeless man asking for people to take a resume rather than asking for money,” Scofield tweeted. “If anyone in the Silicon Valley could help him out, that would be amazing. Please RT so we can help David out!”
The tweet quickly went viral and was retweeted more than 100,000 times, and led to more job offers than he can handle.
According to one Twitter user who also claimed to have slept in his car for months before landing a job, Casarez’s case shows how hard it is to get a foot into the door in Silicon Valley, and how wide doors are open once you are on the inside!
MORE REPORTS