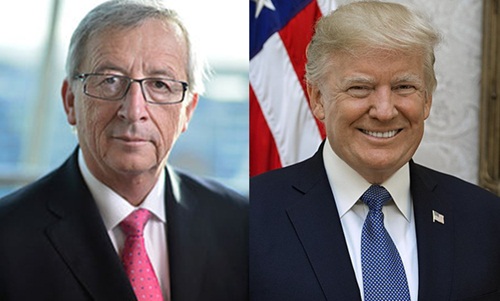 In talks at a Nato summit in Brussels, both Trump and Juncker appeared cordial in their approach and Trump told reporters: “We want to have a fair trade deal and we’re looking to have a fair trade deal and hopefully we can work something out.
The news comes after the Trump administration today announced a $12 billion financial assistance to American farmers hit by retaliatory tariffs imposed by China, India and the EU against punitive US tariffs on aluminium and steel imports.
US Department of Agriculture (USDA) said it will authorise up to $12 billion in programmes as a short-term measure, which is in line with the estimated $11- billion impact of the unjustified retaliatory tariffs on US agricultural goods.
"This is a short-term solution to allow President Trump time to work on long-term trade deals to benefit agriculture and the entire US economy," agriculture secretary Sonny Perdue said.
“Over the years the United States has been losing hundreds of billions of dollars with the European Union, and we just want it to be a level playing field for our farmers, for our manufacturers, for everybody, and we also want a big beneficiary frankly to be the European Union, so we think it can be good for everybody and that’s what we’re here to discuss,”Perdue added.
Juncker hopes to persuade Trump not to impose punishing tariffs on car imports and risk an all-out trade war.
US officials also said the US would be “pleased” if all tariffs, barriers and subsidies could be scrapped.
“We are close partners, allies, not enemies. We have to work together. We are representing half the world’s trade … We should talk of reducing tariffs, not of increasing tariffs. That’s what we have to do,” Juncker is reported to have told reporters.
Trump also agreed. “If we could have no tariffs and no barriers and no subsidies, the United States would be extremely pleased … We want reciprocal. So whether it’s with European Union or others, it has to be reciprocal in nature at a minimum. We’re working on that and I think we’re making tremendous strides.”
Trump has repeatedly complained about the EU’s 10-per cent tariff on imported vehicles. The US has a 2.5-per cent levy on imports of passenger vehicles. The EU, however, claims that Brussels is more generous than Washington in other areas.
At the G7 summit in Canada last month, Trump had even called Juncker a “brutal killer”, presumably with regard to the EU’s trade policies.
Yet, Trump is reported to be ready to reduce the tariff to 20 per cent on imports of cars and auto parts if the EU rethinks its trade policies.
Juncker, however, wants the US to first lift punitive tariffs on European steel and aluminium applied this year before making an offer.
Trump, on the other hand, tweeted: “Tariffs are the greatest! Either a country which has treated the United States unfairly on Trade negotiates a fair deal, or it gets hit with Tariffs. It’s as simple as that – and everybody’s talking! Remember, we are the ‘piggy bank’ that’s being robbed. All will be Great!”
“The European Union is coming to Washington tomorrow to negotiate a deal on Trade. I have an idea for them. Both the US and the EU drop all Tariffs, Barriers and Subsidies! That would finally be called Free Market and Fair Trade! Hope they do it, we are ready – but they won’t!” he said later.
Cecilia Malmström, the EU trade commissioner, said the EU was lining up a second round of US goods to be hit with tariffs should the White House meeting end in failure.
The EU is looking at 20-per cent tariffs on €10 billion (£8.9 billion / $11.7 billion) of US products, or a lower tariff on a longer list of €20 billion of US goods. Brussels has already applied tit-for-tat levies on €2.8 billion worth of US products.
“We hope that it doesn’t come to that and that we can find a solution. If not, the EU commission is preparing a rather long list of many American goods. It would be around $20bn,” Swedish newspaper Dagens Nyheter quoted Malmström as saying.
MORE REPORTS