US President Donald Trump and his Russian counterpart Vladimir Putin opened their summit meeting today, hoping to pave way for a new “extraordinary relationship” between the world’s two most powerful countries. 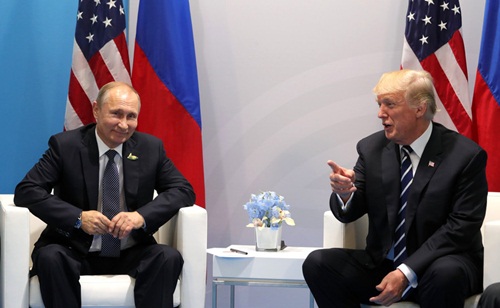 In his opening remarks, President Donald Trump said he wanted good relations with Russia, and blamed Washington’s own past “foolishness and stupidity” for the countries’ hostile ties.
Seated next to the Russian leader in an ornate presidential palace in neutral Finland, Trump had warm words for Putin and said it was his longstanding goal to improve relationship between the two countries.
“I think we will have an extraordinary relationship. I hope so. I’ve been saying it, and I’m sure you’ve heard over the years, and as I campaigned, that getting along with Russia is good thing, not a bad thing,” he said.
"Our two countries, frankly, we have not been getting along well," Trump said as he and Putin sat down at the Presidential Palace in Finland's capital. "I really think the world wants to see us get along."
Putin, for his part, said he and Trump have maintained regular contact, including talking by phone and meeting at international events. Speaking through a translator, the Russian leader said "the time has come to have a thorough discussion on various international problems and sensitive issues."
Trump blamed the United States, and not Russian election meddling or its annexation of Crimea, for a low-point in US-Russia relations.
Trump’s comments come after he spoke against America’s Western allies.
"Our relationship with Russia has NEVER been worse," Trump tweeted Monday morning, blaming "many years of US foolishness and stupidity and now, the Rigged Witch Hunt!"
The Russian foreign ministry “liked” his tweet, and tweeted back: “We agree”.
Trump’s opponents at home were furious, with one Democratic congressman tweeting that Trump had turned the White House into “a propaganda arm for the Kremlin”.
Trump said he and Putin would discuss a range of issues, from trade to the military, along with missiles and China. They shared a brief handshake before reporters were ushered out so they could begin their one-on-one talks in the palace's opulent Gothic Hall.
They'll continue their discussions with an expanded group of aides and over lunch in the Hall of Mirrors, once the emperor's throne room. The leaders will conclude by taking questions at a joint news conference.
The summit, which was being closely monitored by world capitals, was condemned in advance by members of Congress from both parties after the US indictment last week of 12 Russian military intelligence officers accused of hacking Democrats in the 2016 election to help Trump's presidential campaign.
Trump and his aides, however, tried to lower expectations about what the summit will achieve. He told CBS News that he didn't "expect anything" from Putin, while his national security adviser said the US wasn't looking for any "concrete deliverables."
The Kremlin also played down expectations for the summit. It said it did not expect much from the meeting but hoped it would be a “first step” to resolving a crisis in ties.
“Presidents Trump and Putin respect each other and they get along well,” Kremlin spokesman Dmitry Peskov said. “There is no clear agenda. It will be determined by the heads of state themselves as they go along.”
MORE REPORTS