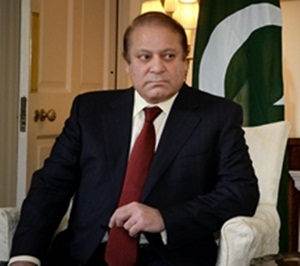 Nawaz Sharif has been sentenced to 10 years in jail, while his daughter Maryam Sharif has been given seven years in the Avenfield corruption case, which is related to the ownership of four flats in the posh Avenfield House in London.
The verdict, delivered by an accountability court in Pakistan in one of the four cases of corruption against Nawaz Sharif, comes as a major blow to his party ahead of general elections on 25 July.
The guilty verdict in absentia against Sharif, 68, threatens to end the career of one of Pakistan’s most high-profile politicians of the last four decades, a political survivor who was prime minister three times.
Supporters of Pakistan Muslim League-Nawaz staged protests holding his pictures as they chanted slogans to condemn the verdict of accountability court on an anti-corruption case against Nawaz Sharif and his daughter.
Both father and daughter are currently in London and a political ally said Sharif would return to Pakistan from London to file an appeal, facing arrest on arrival just before the election, in which his party is in a close race with opposition figure Imran Khan’s party.
Sharif and his daughter are in London with Sharif’s wife, Kulsoom, who is being treated for cancer and is in a coma after suffering a heart attack last month.
“Today’s verdict shows that these Avenfield apartments were purchased using corruption money,” prosecution lawyer Sardar Muzaffar Abbasi told reporters, citing the name of the apartment building in London.
Sharif’s daughter, Maryam, widely seen as his chosen political heir, was sentenced to seven years in prison. Maryam’s husband and PML-N lawmaker Muhammad Safdar was handed a year in jail, he said.
The conviction means Maryam Sharif will be disqualified from contesting the elections.
“The people of Pakistan and PML-N reject this decision,” said Sharif’s brother Shehbaz, who took over as PML-N president after his brother was banned from holding office for life, and is expected to be its prime ministerial candidate. “This decision is based on injustice.”
Both denied wrongdoing and will appeal the decision, said Sharif ally Tariq Fazal Chaudhry, adding that the former premier would return to Pakistan before the election.
The NAB court ordered Sharif to pay a fine of 8 million pounds ($10.6 million) and fined Maryam 2 million pounds, while ordering the confiscation of the London properties on behalf of the Pakistani government, Abbasi said.
MORE REPORTS