A greater representation of women in the government is bad news for corruption, according to a new study published in the Journal of Economic Behavior & Organizationby researchers Chandan Jha of Le Moyne College and Sudipta Sarangi of Virginia Tech. 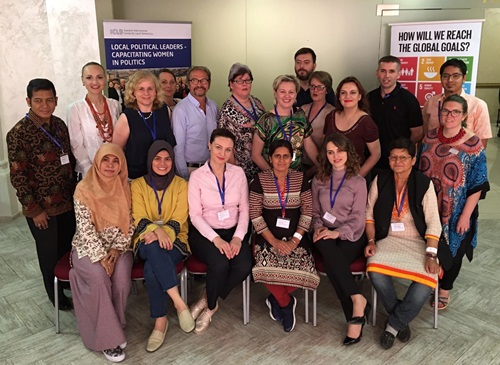 In a cross-country analysis of over 125 countries, this study finds that corruption is lower in countries where a greater share of parliamentarians are women. The study further finds that women's representation in local politics is important too — the likelihood of having to bribe is lower in regions with a greater representation of women in local-level politics in Europe.
"This research underscores the importance of women empowerment, their presence in leadership roles and their representation in government, said Sarangi, an economics professor and department head at Virginia Tech. "This is especially important in light of the fact that women remain underrepresented in politics in most countries including the United States."
Less than a quarter of the members of the US Senate are women and only 19 per cent of the women in the US House of Representatives are women. It is also noteworthy that the United Stated never had a women head or president.
The authors speculate that women policymakers are able to have an impact on corruption because they choose different policies from men. An extensive body of prior research shows that women politicians choose policies that are more closely related to the welfare of women, children, and family.
The relationship is robust to the inclusion of a number of other control variables including economic, cultural, and institutional factors.
The study also uses a statistical technique, known as the Instrumental Variable analysis, to account for the confounding factors and to establish causality in the relationship.
After all it is possible that it is corruption that drives women's participation in politics and not the other way around!
The authors maintain that while the gender-corruption relationship has been studied before, the previous studies suffered from the critique that the relationship between women's representation in government and corruption was not shown to be causal.
Jha and Sarangi's research is the most comprehensive study on this topic and looks at the implications of the presence of women in other occupations as including the shares of women in the labour force, clerical positions, and decision making positions such as the CEOs and other managerial positions.
The study finds that women's presence in these occupations is not significantly associated with corruption, suggesting that it is the policymaking role through which women are able to have an impact on corruption.
Sometimes it is believed that the relationship between gender and corruption may disappear as women gain similarity in social status. This is presumably because as the status of women improves, they get access to the networks of corruption and at the same time learn the know-how of engaging in corrupt activities.
The results of this study, however, indicate otherwise: the relationship between women's representation in parliament and corruption is stronger for countries where women enjoy a greater equality of status. Once again, this finding further suggests that it's policymaking through which women are able to impact corruption.
Jha and Sarangi's study warns that these results do not necessarily mean that women are inherently less corrupt. In fact, their findings suggest otherwise. If women are indeed less corrupt, then there should be a significant negative correlation between all these measures of female participation and corruption.
The policy implications of the study point towards the need for promoting gender equality in general and promoting the presence of women in politics in particular. Previous research has established that a greater presence of women in government is associated with better education and health outcomes.
MORE REPORTS