The United States on Tuesday announced its decision to withdraw from the United Nations Human Rights Council, condemning a "chronic bias against Israel" and the "hypocrisy" of its members. 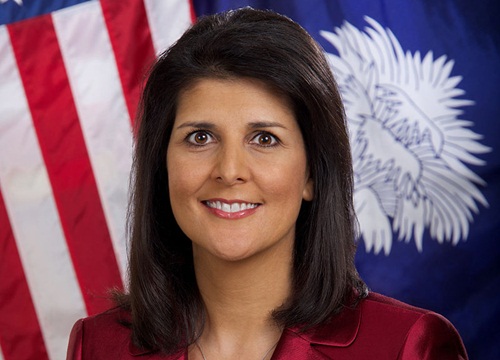 The US ambassador to the United Nations, Nikki Haley and US secretary of state Mike Pompeo jointly announced the decision in Washington. The two, however, insisted that the United States would remain a leading champion of human rights, on its own.
Haley said the US withdrawal from the Human Rights Council "is not a retreat from our human rights commitments."
Nikki Haley also slammed Russia, China, Cuba and Egypt for thwarting US efforts to reform the council. She also criticised countries which shared US values but "were unwilling to seriously challenge the status quo."
"Look at the council membership, and you see an appalling disrespect for the most basic rights," said Haley, citing Venezuela, China, Cuba and Democratic Republic of Congo.
Haley also said the "disproportionate focus and unending hostility toward Israel is clear proof that the council is motivated by political bias, not by human rights."
Coming after Washington's pull-out from the Paris climate agreement (See: Trump pulls US out of Paris climate deal) and the 2015 Iran nuclear deal, the withdrawal from UN Human Rights Council is seen as the latest US rejection of multilateral engagement. Trump’s critics see it as an offshoot of Trump's general hostility to the world body and to multilateral diplomacy in general.
The United States is half-way through a three-year term on the main UN rights body and the Trump administration had long threatened to quit if the 47-member Geneva-based body was not overhauled.
The move also comes amidst an ongoing US border action against Mexican immigrants that have separated thousands of children from immigrant Mexican parents.
UN High Commissioner for Human Rights Zeid Ra'ad al-Hussein on Monday called on Washington to halt its "unconscionable" policy.
Rights groups have criticised the Trump administration for not making human rights a priority in its foreign policy. Critics say Washington is selective in deciding human rights abuses within and in some parts of the world.
Several rights and aids groups, including Human Rights First, Save the Children and CARE, wrote to Pompeo warning the US withdrawal from the UN body would "make it more difficult to advance human rights priorities and aid victims of abuse around the world."
"The US's absence will only compound the council's weaknesses," they wrote.
Jamil Dakwar, director of the American Civil Liberties Union's Human Rights Program, said Trump's "misguided policy of isolationism only harms American interests and betrays our values as a nation."
Jewish rights group the Simon Wiesenthal Center applauded the US withdrawal and urged other countries to do the same.
MORE REPORTS