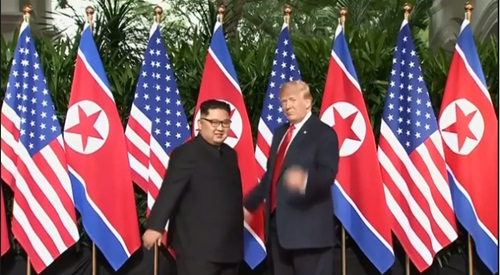 The process of denuclearisation (of Korean peninsula) would happen “very, very quickly”, adding that he had formed a “special bond” with Kim Jong Un and the relationship with North Korea would be very different, Trump said after his meeting with Kim.
“President Trump committed to provide security guarantees to the DPRK and Chairman Kim Jong Un reaffirmed his firm and unwavering commitment to complete denuclearisation of the Korean Peninsula,” said a joint statement issued after their historic summit in Singapore.
US Secretary of State Mike Pompeo and North Korean officials would hold follow-up negotiations “at the earliest possible date”, the statement said.
The joint statement, however, did not give any details on how denuclearisation would be achieved. Nor did it make any mention of the international sanctions imposed on North Korea, for pursuing its nuclear weapons programme.
There was also no reference to the signing of a final peace treaty. While South Korea and North Korea also had earlier pledged to solve all issues peacefully, the two sides that fought the 1950-53 Korean War, in which millions of people died, are technically still at war.
Without a formal agreement among the two Koreas and their backers there could only be a truce and no formal end to the conflict.
However, the two sides had agreed to recovering the remains of prisoners of war and those missing in action and repatriating them.
If the two sides abide by the joint statement, that itself could fundamentally change the security landscape of Northeast Asia and make the world safer.
Ahead of signing the joint statement, Trump described it as a “comprehensive” document, while Kim said the two leaders had a historic meeting “and decided to leave the past behind. The world will see a major change.”
Trump said he had formed a “very special bond” with Kim and that relationship with North Korea would be very different.
“People are going to be very impressed and people are going to be very happy and we are going to take care of a very dangerous problem for the world,” Trump said.
Asked whether he would invite Kim to the White House, Trump said: “Absolutely, I will.”
He called Kim “very smart” and a “very worthy, very hard negotiator.”
“I learned he’s a very talented man. I also learned that he loves his country very much.”
In fact, Trump said the summit at the Capella hotel on Singapore’s Sentosa, a resort island with luxury hotels, had gone “better than anybody could have expected”.
MORE REPORTS