India has refused to budge from its stated position on China’s ambitious 'Belt and Road Initiative’ and refused to endorse a joint declaration supporting the project that was signed on Sunday following the conclusion of the Shanghai Cooperation Organisation (SCO) summit in Qingdao, China. 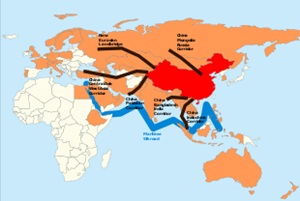 India had boycotted a meeting to endorse the Chinese project more than a year ago, and on Sunday remained the lone dissenting voice as the China pushed the project at the SCO summit.
Prime Minister Narendra Modi made it clear at the outset itself that India welcomes all connectivity projects that respect the sovereignty and territorial integrity of nations.
After the two-day SCO summit at Qingdao, China managed to convince eight full members who signed the joint declaration, but failed to persuade India to endorse its BRI, the reference to which was also missing in the joint declaration signed by India.
“The Republic of Kazakhstan, the Kyrgyz Republic, the Islamic Republic of Pakistan, the Russian Federation, the Republic of Tajikistan, and the Republic of Uzbekistan reaffirm their support for the ‘Belt and Road Initiative’ proposed by China and affirm that all parties should implement the ‘Belt and Road Initiative’ to promote the ‘Belt and Road’ initiative,” stated the declaration.
India’s refusal to endorse the BRI at the SCO was a reiteration of the stated Indian position, which was articulated at the SCO foreign ministers meet in April. At the time, the SCO declaration had not named India as one of the supporters of the BRI.
The BRI, proposed by Chinese President Xi Jinping in 2013, is aimed at building a trade and infrastructure network connecting Asia with Europe and Africa along ancient trade routes. India has staunchly opposed the project citing the China Pakistan Economic Corridor (CPEC) – an important part of the BRI – that goes through Pakistan-occupied Kashmir (PoK). Citing its opposition to the CPEC, India had skipped the Belt and Road Forum in May last year, which 29 state heads had attended.
MORE REPORTS