The diplomatic world was left flabbergasted this weekend after US President Donald Trump caused havoc at the annual G7 summit in Canada, insulting his host Justin Trudeau before jetting off halfway across the world to Singapore to meet North Korean leader Kim Jong-un without a specific agenda for the discussions. 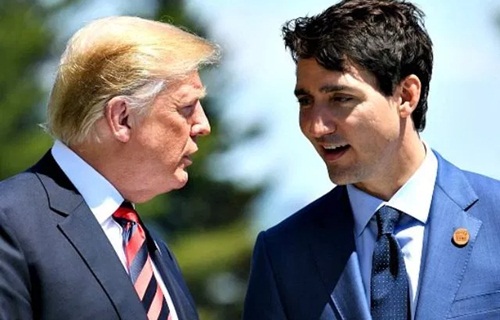 In scenes, remarks, and tweets that are unprecedented in the diplomatic world, Trump brought the US-led alliance of advanced economies close to a rupture, refusing to sign a joint communique with the group and calling Trudeau a “dishonest liar” — all over the contentious issue of trade tariffs on which he feels the US has been unfairly treated.
The United States and Canada swung further on Sunday toward a diplomatic and trade crisis as top White House advisers lashed out at Canadian Prime Minister Justin Trudeau a day after US President Trump called him “very dishonest and weak”.
The spat drew in Germany and France, which sharply criticised Trump’s decision to abruptly withdraw his support for a Group of Seven communique hammered out at the Canadian summit on Saturday, accusing him of destroying trust and acting inconsistently.
“Canada does not conduct its diplomacy through ad hominem attacks … and we refrain particularly from ad hominem attacks when it comes to a close ally,” Canadian foreign minister Chrystia Freeland told reporters on Sunday.
Even India was drawn into the fracas, with Trump insisting his gripe on tariffs was not restricted to the advanced economies alone.
“This isn’t just G7. I mean, we have India, where some of the tariffs are 100 per cent. A hundred per cent. And we charge nothing. We can’t do that. And so we are talking to many countries. We’re talking to all countries. And it’s going to stop. Or we’ll stop trading with them. And that’s a very profitable answer, if we have to do it,” Trump said in a bewildering press conference before he departed Canada, insisting that the summit was a success and the level of relationship he shared with the G7 leaders was a10 on a scale of one to ten.
Freeland reiterated that Canada would retaliate to US tariffs in a measured and reciprocal way, adding the country would always be willing to talk.
Trump in Singapore today escalated his war of words with Canada and the European Union in a pair of tweets. Trump said: “Fair Trade is now to be called Fool Trade if it is not Reciprocal” and suggested that Canada was profiting from U.S. trade, citing what he said was a Canadian press release. “Then Justin acts hurt when called out!”
The moment he left for the airport on Sunday, he let the tweets rip his host. “PM Justin Trudeau of Canada acted so meek and mild during our @G7 meetings only to give a news conference after I left saying that, “US Tariffs were kind of insulting” and he “will not be pushed around”. Very dishonest & weak. Our Tariffs are in response to his of 270% on dairy!” Trump tweeted.
“Based on Justin’s false statements at his news conference, and the fact that Canada is charging massive Tariffs to our US farmers, workers and companies, I have instructed our US Reps not to endorse the Communique as we look at Tariffs on automobiles flooding the US Market!” he added.
“Based on Justin’s false statements at his news conference, and the fact that Canada is charging massive Tariffs to our U.S. farmers, workers and companies, I have instructed our US Reps not to endorse the Communique as we look at Tariffs on automobiles flooding the US Market!” he further tweeted.
Just minutes after a joint communique, approved by the leaders of the Group of Seven allies, was published in Canada's summit host city Quebec, Trump launched his Twitter broadside, taking exception to comments made by Trudeau at a news conference.
His aides took the matter further. "He really kinda stabbed us in the back," top US economic advisor Larry Kudlow said of Trudeau on CNN. "He did a great disservice to the whole G7."
"We went through it. We agreed. We compromised on the communique. We joined the communique in good faith," Kudlow said.
US trade advisor Peter Navarro, speaking on Fox News, reinforced that message. "There's a special place in hell for any foreign leader that engages in bad-faith diplomacy with President Donald J. Trump and then tries to stab him in the back on the way out the door," he said.
"That's what bad-faith Justin Trudeau did with that stunt press conference. That's what weak, dishonest Justin Trudeau did."
Trudeau, in Quebec City for bilateral meetings with non-G7 leaders after the summit, did not comment as he arrived.
After Trump's angry tweets, Trudeau's office issued a brief response: "We are focused on everything we accomplished here at the G7 summit. The Prime Minister said nothing he hasn't said before — both in public, and in private conversations with the president."
He also got direct personal support from some European leaders.
British Prime Minister Theresa May “is fully supportive” of Trudeau and his leadership, a senior UK government source said, while European Council President Donald Tusk tweeted, “There is a special place in heaven for @JustinTrudeau.”
Having castigated his host and neighbour and disrupted the alliance of democracies, Trump tweeted about being on his way to Singapore “where we have a chance to achieve a truly wonderful result for North Korea and the World”.
“It will certainly be an exciting day and I know that Kim Jong-un will work very hard to do something that has rarely been done before ... create peace and great prosperity for his land. I look forward to meeting him and have a feeling that this one-time opportunity will not be wasted!” he said of his meeting with the reclusive North Korean dictator who has never travelled beyond China.
MORE REPORTS