Global trade: simple, swift and effective, thanks to blockchain

T-shirts from Bangladesh, coffee from Columbia, computers from China: the global trade in goods has grown rapidly, particularly during the last three decades. 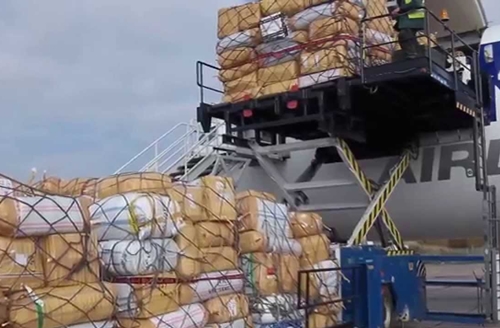 But transactions across national borders are still astonishingly complex and associated with considerable paperwork. Blockchain technology could make foreign trade significantly simpler and faster.
As a rule, when a German company orders tablets from China, the transaction is safeguarded with a so-called letter of credit — two banks, one on the exporter side and one on the importer's, monitor the trade as neutral bodies.
They guarantee that the exporter receives its money when the goods are delivered in compliance with the contract and that the importer does not have to pay until the goods are underway within the specified time and in the ordered quantity and quality.
The exporter must produce numerous documents, such as diverse cargo and transport papers and the packing list, to verify that the transaction process is as stipulated in the contract. Today these documents are still sent by mail because banks and trading partners refuse e-mail exchanges due to the susceptibility to manipulation.
"In many cases, the paperwork causes higher costs than the actual delivery of goods," says Prof. Dr. Gilbert Fridgen from the Fraunhofer Institute for Applied Information Technology FIT, which familiarises representatives of trade and industry with blockchain technology.
Together with experts from the Norddeutsche Landesbank, Fridgen and his team from the Fraunhofer Blockchain Lab have developed a prototype for processing the global trade in goods without paper. Because with help from blockchain, each step in the international transaction can be documented reliably, transparently and traceably, from the time the order is placed until the goods are delivered.
Decentralised database
A blockchain is a type of decentralised database. Each blockchain user stores the complete data set in the form of blocks that are linked to one another using cryptography.
When new data is added, a coordination process updates the blockchain for all users. "Combined with the cryptographic block linking, this decentralised coordination procedure ensures that the data in a blockchain cannot be manipulated," explains Prof. Dr. Wolfgang Prinz, deputy director of the Fraunhofer FIT. If someone were to attempt to change the blockchain contents, all other users would detect it immediately.
Every step of a process, with all the associated data and documents, can be securely and irreversibly captured in a blockchain.
This is ideal for the international trade in goods, but also for numerous other applications, such as a company's internal documentation. "Conducting audits can be considerably faster, simpler and more economical if all relevant documents have been entered into a blockchain," Fridgen reports, because such a blockchain would unequivocally show who did what and when and how they did it.
"All our workshop participants listened attentively to this part. Particularly in tightly regulated sectors, the expense for audits frequently reaches millions."
In general, blockchain is particularly interesting for companies whose business models are based on positions of trust. "Blockchain cannot replace banks, notaries or CPAs yet. But the technology shows great potential in these areas," says Prinz. Many business models would have to be rethought and repositioned.
Blockchain can make work sequences simpler, faster, more secure and more efficient. It can be profitably used for foreign trade transactions, as well as for other delivery versus payment transactions, where today the contracting parties still have to fill out and print forms and then wait for collateral securities.
Another of blockchain's strengths: In combination with specially programmed software mechanisms, so-called Smart Contracts, contract conditions can be automatically executed as soon as the stored conditions are satisfied. For example, the leased car's door could open or remain closed, depending on whether or not the payment of the agreed installment has been recorded and verified in the blockchain.
This automated delivery and performance would eliminate the need for courts to enforce claims because a breach of contract would be technically impossible.
Blockchain is also a challenge for providers of online trading platforms. Because the new technology allows more secure transactions to be processed directly between the seller and buyer, without additional protection from the platform operator. "Blockchain technology could be used to establish a new generation of the Internet. Joining the Internet of Things, which is the current topic of discussion, would be an Internet of Trust and Values," Prinz believes.
Reliable proof of origin
For the logistics sector, blockchain is less threatening than it is attractive: A transport chain could be documented without any gaps and the genuineness of the shipped object could be guaranteed.
"There is already a blockchain solution for diamond transports", adds Prinz. Blockchain could also provide reliable verification of the origin of medicines or foodstuffs, and, for example, check if the cooling was guaranteed throughout the entire transport.
In the Fraunhofer Blockchain Lab, Prinz and Fridgen work with their colleagues Prof Dr Thomas Rose, Prof. Dr. Nils Urbach and their teams on a very wide range of applications.
For example, they developed a music box that uses blockchain to implement the coordination of the music requests within a group, an entertaining entry into the blockchain world that is also introducing interested parties from trade and industry to the technology's basic functions. In another project, the BSCW groupware platform developed by FIT and OrbiTeam is programmed as a blockchain solution that allows documents and cooperation processes to be registered.
This allows irreversible recording of their status and subsequent checking.
"Working with our workshop participants, we have already identified numerous possible applications. We are currently still working with prototypes, but the development can be very swift. This is why it is important to act now, to adapt business models to the new technology, and to optimize processes with its help," Fridgen emphasises.
MORE REPORTS