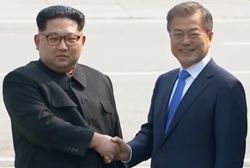 After an historic meeting, the two leaders issued a joint declaration that also pledged to pursue the “complete denuclearisation” of the Korean Peninsula.
Kim Jong-un became the first North Korean leader to cross the border into South Korea since the 1953 cease-fire.
“The South and the North affirmed their mutual goal of realising a nuclear-free Korean Peninsula through complete denuclearisation," a joint statement released after the talks said.
The reunion of Korean families separated by the war would also resume, the statement added.
The two leaders also pledged to push for trilateral talks – involving the United States, or four-way dialogue also involving China – on a peace pact to replace the armistice.
“The two leaders solemnly declared before the 80 million people of our nation and the entire world that there will be no more war on the Korean Peninsula and a new age of peace has opened,” The declaration signed at the truce village of Panmunjom said.
The two Koreas agreed to stop all hostilities against each another, and set up a permanent liaison in the North Korean border town of Kaesong.
They also agreed to a conventional arms reduction pending the removal of military tension. Moon will now travel to Pyongyang for a second summit later.
Earlier, the pair planted a sapling of a tree that sprouted in 1953, the year the armistice was signed to end the 1950-53 Korean War, according to the South Korean presidential office.
“The moment Chairman Kim crossed the Military Demarcation Line, Panmunjom became a symbol of peace, not a symbol of division,” Moon had said in televised comments at the start of their meeting at Peace House.
The two leaders also mutually committed to frequently and earnestly discuss crucial issues regarding Korean people and solidify mutual trust through regular summits and direct telephone calls.
They also agreed to make joint efforts to further expand the good move towards the continued development of inter-Korean ties and reunification.
The US, China and South Korea have maintained that the goal of any talks must be denuclearisation.
Kim had last month said he would agree to discuss denuclearisation, but wanted a security guarantee in return and the removal of military threats against North Korea.
That offer prompted US president Donald Trump to agree to meet Kim in person. The meeting is likely to happen in June.
The Chinese foreign ministry said China applauded the historic steps taken by the leaders of the two Koreas and hopes the meeting will usher in a new chapter of long-standing peace.
White House spokeswoman Sarah Huckabee Sanders said, “We are hopeful that talks will achieve progress toward a future of peace and prosperity for the entire Korean Peninsula”.
MORE REPORTS