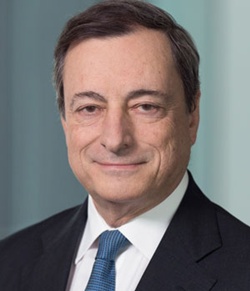 The ECB governing council at its meeting today decided that the interest rate on the main refinancing operations, the interest rates on the marginal lending facility and the deposit facility will remain unchanged at 0.00 per cent, 0.25 per cent and (-)0.40 per cent respectively.
The governing council expects the key ECB interest rates to remain at their present levels for an extended period of time, and well past the horizon of the net asset purchases
ECB chief Mario Draghi is expected to play down worries over recent softness in the euro zone economy, even as he keeps option to end lavish bond purchases by the close of the year.
The governing council has confirmed that the net asset purchases, at the current monthly pace of €30 billion, will continue until the end of September 2018, or beyond, if necessary, and in any case until the need for a sustained adjustment consistent with its inflation aim is felt.
The Eurosystem will reinvest the principal payments from maturing securities purchased under the asset purchase programme for an extended period of time after the end of its net asset purchases, which will contribute both to favourable liquidity conditions and to an appropriate monetary policy stance, ECB stated.
With the 19-country bloc’s economy expanding for 20 straight quarters and millions of new jobs created, the main debate among policymakers is about how quickly to withdraw stimulus and preserve ECB firepower for the next downturn.
While the ECB’s 2.55 trillion euro ($3.10 trillion) bond purchase programme, has cut borrowing costs and kick-started growth, although with no inflationary effect, policymakers will need to end the indefinite growth of money.
With the bond-buying scheme due to expire in September, the ECB will have to decide in June or July whether to extend purchases or wind them down. But with the risk of a global trade war still looming, it may not decide until absolutely necessary, so retaining the flexibility to adjust policy.
Business sentiment has already taken a hit, particularly in export-focused Germany, and a full-fledged trade war could quickly hurt growth — a risk already highlighted by policymakers at the ECB’s March meeting.
A key worry is that protectionist rhetoric from the United States could push down the value of the dollar even as the Federal Reserve is likely to raise interest rates several times this year, to support the US currency.
A stronger euro would cap inflation, but would affect growth and exports. The impact of the euro’s strength has been relatively limited so far. The currency is up 1.5 per cent against the dollar this year and just 0.3 per cent higher on a trade-weighted basis.
It was trading at $1.2175 at 1148 GMT on Thursday, having retraced most of a rally that started in January and took it at one stage as high as $1.2555.
MORE REPORTS