China, which bulldozed its way through Pakistan-occupied Kashmir (PoK) to push its Belt and Road Initiative in Pakistan is now looking to persuade India to support a similar initiative in Nepal. 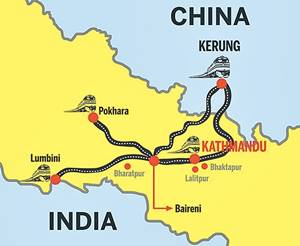 Days after India announced new connectivity projects with Nepal during Prime Minister KP Sharma Oli’s 3-day visit to this country, Chinese foreign minister Wang Yi has met his Nepalese counterpart Chinese foreign minister Wang Yi in an effort to persuade India to change its views about its BRI.
The meeting of the two foreign ministers comes ahead of a planned visit by India’s external affairs minister Sushma Swaraj to China on 22 April.
Like the China-Pakistan Economic Corridor (CPEC) that passes through Kashmir, China is looking to build an economic corridor that passes through Nepal to India. The Chinese proposal also includes a range of projects.
Visiting Nepal foreign minister Pradeep Kumar Gyawali is reported to have expressed interest in projects that include rail, road, energy and telecommunication networks connecting the two countries.
“Let me say China and Nepal have agreed on a long-term vision of a multi-dimensional cross-Himalaya connectivity network,” Wang said at a joint press briefing along with Gyawali.
“I have a dream of travelling to China from Nepal on a modern train across the Himalayas and enjoying the scenic beauty,” Gyawali said, adding, “Nepal has expectations on the initiatives to contribute to the development of infrastructure, enhanced cross-border connectivity through railways and roads, promotion of trade, tourism and investment, and people-to-people contacts.”
“We believe that such a well-developed connectivity network can also create conditions for an economic corridor connecting China, Nepal and India.” He added, “We hope that such cooperation will contribute to development and prosperity for all the three countries,” Chinese foreign minister Wang Yi is reported to have said on Wednesday after talks with his Nepalese counterpart.
Beijing hopes that such deals with Nepal would put pressure on India to accept the BRI and go along with its construction programme.
With not much success in its Pakistan and Sri Lanka projects amidst allegations of huge costs to host countries, China desperately needs to show some signs of acceptance to BRI projects.
China is offering to not just link the two countries but extend the railway line to Lumbini, which is close to the Indian border. Once implemented, it will open up a land route to ship vast quantities of Chinese goods through Nepal to areas close to the Indian border.
Gyawali, however, has requested China to correct the huge balance of trade against Nepal by buying more goods. Opening transportation links would only enhance the supply of cheap Chinese goods and push the small country into a deeper trade deficit.
Wnag has also conveyed a message to India, saying, “Support for Nepal’s development should be a common understanding between India and China.”
And China wants India to do this at its own peril. In fact, China has been encouraging Nepal to reduce its economic dependence on India because that would give China both a diplomatic and business advantage.
“Nepal on its part should leverage its geographical advantage and connect China and India for greater development. Nepal stands as a natural beneficiary from cooperation from China and India. I think this is a logical desire that should be supported by China and India,” Wang said.
MORE REPORTS