The Bangladesh Supreme Court has stayed the release of former prime minister Khaleda Zia, 72, on bail in a corruption case in which she was sentenced to five years in jail. 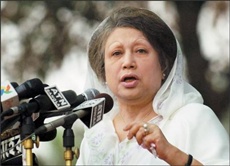 On March 12, the Dhaka High Court granted Zia the chairperson of the Bangladesh Nationalist Party (BNP) a four-month interim bail, following her conviction to a five-year prison term in February.
Khaleda was given a shorter term while her son, Tarique Rahman, and four others were jailed for 10 years at the end of a case that lasted nearly 10 years. (See: Former Bangladesh PM Khaleda Zia gets 5 years in jail for graft).
Rahman, a senior party leader and an heir-apparent the BNP, lives in London. He was tried in absentia along with two others. Two defendants are behind bars.
Khaleda, Rahman and aides were convicted of stealing 21 million taka ($248,154) in foreign donations received by an orphanage trust set up when she was last prime minister, from 2001 to 2006, lawyers said.
The conviction means that Zia, head of the Bangladesh Nationalist Party, will be barred from running in the next national elections scheduled for December, as Bangladesh law says anyone imprisoned for more than two years cannot run for office for the next five years.
"The full bench of the appellate division (of the Supreme Court) stayed until May 8 her (Zia's) bail, which means she will not be freed until that day," a spokesperson from the Attorney General's office said.
The five member apex court bench, headed by Chief Justice Syed Mahmud Hossain, also fixed 8 May as the date for hearing the arguments supporting and opposing Zia's four-month interim bail by the High Court.
PTI reported quoting legal experts, even if Zia would have got the bail, she was unlikely to be released from jail as she was shown "arrested" in another criminal case under a separate arrest warrant by a court in central Comilla district.
MORE REPORTS