A strong earthquake measuring 6.1 on the Richter scale rattled Pakistan and Afghanistan on Wednesday, including the capital cities of both countries, killing a young Pakistani girl and injuring at least 22 around the region. 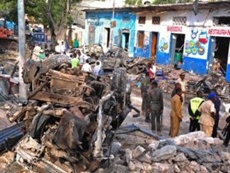 The earthquake was felt in the Delhi-National Capital Region (NCR) region and across large swathes of northern India on Wednesday at 12.40 pm.

The US Geological Survey reported the quake's centre was in northeast Afghanistan near the Pakistan border, about 35 km south of Jarm in the Hindu Kush region. It had a depth of 191.2 km.

Reports from Uttar Pradesh's Noida city said the tremors were felt over around one minute, the report said. The tremors were also felt in Jammu and Kashmir. Offices in Delhi – NCR were evacuated as a precaution.

Jarm is the same area which was the centre a devastating 7.5 magnitude quake in October 2015 that triggered landslides and flattened buildings, killing more than 380 people across the region.

Across the border in Pakistan, homes, offices and schools were quickly evacuated in Islamabad, Peshawar and Lahore.

Afghanistan is frequently hit by earthquakes, especially in the Hindu Kush mountain range, which lies near the junction of the Eurasian and Indian tectonic plates.

Pakistan is also among the most earthquake-prone regions of the world with high vulnerability to earthquakes as the country lies in the same junction.

In October 2005, a high intensity earthquake measuring 7.4 magnitude hit parts of Pakistan, killing over 80,000 people and leaving hundreds of thousands others homeless.