The International Court of Justice (ICJ) in The Hague on Tuesday stayed the death sentence awarded to Kulbhushan Jadhav by a Pakistani military court, after India instituted proceedings against Pakistan at the court accusing Islamabad of "egregious violations of the Vienna Convention on Consular Relations" in the detention and trial of Jadhav. 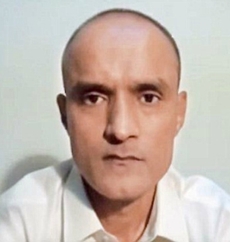 India in its application pointed out that it was not informed of Jadhav's detention until long after his arrest and that it learnt about the death sentence against Jadhav from a press release.

Pakistan also failed to inform the accused Jhadav of his rights, India has submitted.

The application further alleges that, in violation of the Vienna Convention, the authorities in Pakistan are denying India its right of consular access to Jadhav, despite its repeated requests.

India also submitted that it has information that Jadhav was ''kidnapped from Iran, where he was carrying on business after retiring from the Indian Navy, and was then shown to have been arrested in Baluchistan'' on 3 March 2016, and that the Indian authorities were notified of the arrest on 25 March 2016.

India, in its application, said it had sought consular access to Jadhav on 25 March 2016 and repeatedly thereafter.

On 23 January 2017, Pakistan requested India's assistance in the investigation of  Jadhav's alleged ''involvement in espionage and terrorist activities in Pakistan'' and, by a Note Verbale of 21 March 2017, informed India that ''consular access (to Jadhav) would be considered in the light of the Indian side's response to Pakistan's request for assistance in (the) investigation process''.

India said, ''linking assistance to the investigation process to the grant(ing) of consular access was by itself a serious violation of the Vienna Convention''.

India has sought ''immediate suspension of the sentence of death awarded to the accused and restitution in interregnum by declaring that the sentence of the military court arrived at, in brazen defiance of the Vienna Convention rights, and in defiance of elementary human rights of an accused..., is violative of international law and the provisions of the Vienna Convention.''

The application sought restraining Pakistan from giving effect to the sentence awarded by the military court, and directing it to take steps to annul the decision of the military court on the basis of available law in Pakistan.

And, in case Pakistan is unable to annul the decision, then India wants the ICJ to ''declare the decision illegal being violative of international law and treaty rights and restrain Pakistan from acting in violation of the Vienna Convention and international law by giving effect to the sentence or the conviction in any manner, and directing it to release the convicted Indian national forthwith.''

External affairs minister Sushma Swaraj on Tuesday spoke to Kulbhushan Jadhav's mother and told her about the order of President of the ICJ. Jadhav's mother had earlier applied for a visa to be able to visit Pakistan and appeal against his death sentence but Islamabad has not yet responded to the request.

She said senior advocate Harish Salve is representing India before International Court of Justice in the Kulbhushan Jadhav case.

India has rarely approached ICJ in disputes with Pakistan, fearing that any such move could allow Islamabad to seek intervention of the same court in other bilateral disputes.

Also, since Pakistan insists on primacy of its laws over international laws and conventions, it remains to be seen how Pakistan reacts to this issue.