There was a palpable sense of relief around Europe and the globe after centrist Emmanuel Macron comfortably won the run-off election for the French presidency and promised to fight "the forces of division that undermine France". 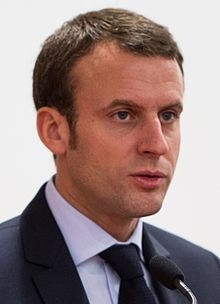 Macron, 39, defeated the far right's Marine Le Pen, winning 66.06 per cent of the vote to her 33.94 per cent. His victory helped stem the panic caused by Britain's exit from the European Union and the US election of unpredictable rightist Donald Trump, who opposes much of what the EU stands for.

The euro hit a six-month high against the dollar today while Asian shares gained and US stock futures briefly touched a record high on investor relief.

Macron's emphatic victory brought comfort to investors and European allies who had been nervous about the risk of another populist upheaval, as both Britain's vote to quit the EU and Trump's election as US president had gone against the prediction by pollsters or bookmakers.

Acknowledging his victory, Macron told supporters he wanted to ensure Le Pen voters "no longer have a reason to vote for an extremist position".

Macron was elected on a passionately pro-European Union platform, while Le Pen by contrast threatened to pull out of the single currency and hold an "In / Out" referendum on France's membership of the EU.

In a speech to jubilant supporters, Macron said, "Tonight you won, France won. Everyone told us it was impossible, but they don't know France."

At 39, he is France's youngest president. His win overturns the decades-long dominance of France's two main political parties.

Yet some remain worried, as not only did a third of the electorate choose Le Pen but even more abstained or cast a blank ballot.

Macron said he had heard "the rage, anxiety and doubt that a lot of you have expressed", vowing to spend his five years in office "fighting the forces of division that undermine France".

Although she performed worse than final polls had indicated, her anti-globalisation, anti-immigrant, high-spending manifesto attracted an estimated 11 million votes.

She said the election had shown a division between "patriots and globalists" and called for the emergence of a new political force.

Le Pen said her National Front party needed to renew itself and that she would start the "deep transformation of our movement", vowing to lead it into parliamentary elections next month.

EU breathes sigh of relief
Most of those running the EU were relieved, given Le Pen's policies and last year's Brexit vote.

US President Donald Trump, who has previously praised Le Pen, tweeted his congratulations to Macron for the "big win" and said he looked forward to working with him.

But many of those who voted for him did so to stop Marine Le Pen; they are yet to be convinced by his political programme, unlike Brussels, which is delighted.

But while far right populists have been defeated in Austria, the Netherlands and France, the issues that drove voters to them - unemployment, immigration and fear of globalisation - remain to be resolved.

France's deep political divisions will become evident once again in the lead-up to parliamentary elections.

Experts are asking whether Emmanuel Macron, inexperienced in politics and with his fledgling party, be able to form the credible government needed to pass the reforms he promises.

With parliamentary elections in June, he will be campaigning on behalf of his new movement En Marche to get the seats he needs to pursue his legislative agenda.

The grouping, founded just over a year ago, does not yet have a presence in parliament. If he cannot gain a majority he may have to form a coalition.

His campaign pledges included a 120,000 reduction in public-sector jobs, a cut in public spending by €60 billion, and a lowering of the unemployment rate to below 7 per cent.

He vowed to ease labour laws and give new protections to the self-employed.