Donald Trump sworn in as US President 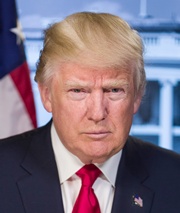 Republican Donald Trump was on Friday sworn in as the 45th president of the United States with the new President pledging to pursue ''America First'' policies in his inaugural address to the nation.

In a populist outburst that could appeal to the common man, Trump vowed to rid the country of ravaged factories and gangs of criminals and drug peddlers and resurrect America as the greatest power on Earth.

''From this moment on, it's going to be America First,'' the Republican told hundreds of thousands of people gathered on the grounds of the National Mall after taking the oath of office on the West Front of the US Capitol.

Four past US presidents (three Democrats and a Republican), including Jimmy Carter, Bill Clinton, George Bush and Barack Obama, attended the swearing-in ceremony.

''Every decision on trade, on taxes, on immigration, on foreign affairs, will be made to benefit American workers and American families,'' Trump said, describing the country's social and economic ills as ''American carnage.''

''We, the citizens of America, are now joined in a great national effort to rebuild our country and restore its promise for all of our people.

''Together, we will determine the course of America and the world for many, many years to come. We will face challenges, we will confront hardships, but we will get the job done,'' he said.

Himself a businessman, Trump bemoaned the concentration of wealth in the hands of a few people, as a small group in the nation's capital continued to reap the rewards of government at the expense of the people. ''Washington flourished, but the people did not share in its wealth. Politicians prospered, but the jobs left and the factories closed. The establishment protected itself, but not the citizens of our country.

Trump, 70, takes over a country divided after a savage election campaign. A wealthy New York businessman and former reality TV star, he is widely expected to set the country on a new, uncertain path at home and abroad.

Under pressure to unite the country after the bitterly fought campaign, Trump said that through allegiance to the United States, ''we will rediscover our loyalty to each other" and called for a ''new national pride'' that would help heal divisions.

Trump signalled the possibility of a more aggressive approach to Islamic State militants than his immediate predecessor, Democrat Barack Obama.

''We will reinforce old alliances and form new ones, and unite the civilized world against radical Islamic terrorism, which we will eradicate completely from the face of the earth," he said.

His ascension to the White House, while welcomed by Republicans tired of Obama's eight years in office, raises a host of questions for the United States.

Trump campaigned on a pledge to take the country on a more isolationist, protectionist path and has vowed to impose a 35-per cent tariff on goods on imports from US companies that went abroad.

His desire for warmer ties with Russian President Vladimir Putin and threats to cut funding for NATO nations has allies from Britain to the Baltics worried that the traditional US security umbrella will be diminished.

In the Middle East, Trump has said he wants to move the US Embassy in Israel from Tel Aviv to Jerusalem, at the risk of angering Arabs and stirring international concern. He has yet to sketch out how he plans to carry out a campaign pledge to ''knock the hell out of'' Islamic State.

Trump's to-do list has given Republicans hope that, since they also control the US Congress, they can quickly repeal and replace Obama's signature healthcare law, approve sweeping tax reform and roll back many federal regulations they say are stifling the US economy.

Democrats, in search of firm political footing after the unexpected defeat of Hillary Clinton, are planning to fight him at every turn. They deeply oppose Trump's anti-immigrant rhetoric from the campaign trail and plans to build a wall along the southern US border with Mexico.

Trump's critics have been emboldened to attack his legitimacy because his win came in the Electoral College, which gives smaller states more clout in the outcome. He lost the popular vote to Clinton by about 2.9 million.

Trump's critics also point to the conclusion of US intelligence agencies that Russia used hacking and other methods during the campaign to try to tilt the election in the Republican's favor.

Trump has acknowledged the finding - denied by Moscow - that Russia was behind the hacking but said it did not affect the outcome of the election.