Xi Jinping to walk the talk with world leaders at Davos

President Xi Jinping of China plans to stride into the snowy high-altitude conclave of the world's financial elite next week, attending the World Economic Forum at Davos, Switzerland, the first time a top Chinese leader will put himself into the mix of political leaders and business executives who are perceived to call the shots in the global economy. 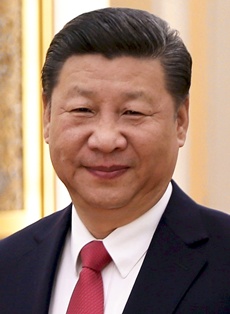 His participation was announced by the Chinese foreign ministry on Tuesday. According to The New York Times, it is the latest, and in some ways the boldest, Chinese attempt to compete with the United States' dominant position in world economic and strategic institutions, a decades-long campaign that has been carried out everywhere from the conference rooms of Asian central banks to the waters of the South China Sea to the halls of the United Nations in New York.

But it is unclear whether Xi, who rarely ventures beyond platitudes in discussing the strategies of the world's second largest economy, can take advantage of this time of transition when the rest of the world is gauging whether the United States is pulling back from global leadership.

Xi may sense an opening during a historic inflection point. He plans to deliver a speech at Davos at a moment when the incoming United States president, Donald J Trump, has suggested that the United States should withdraw from the traditional superpower role it has played since World War II, including its leadership of a global free trade agenda.

In recent years, Davos had come to embody that American-led agenda - a gathering at an Alpine ski resort of some of the world's most powerful figures in the realms of politics, media and technology. Discussions each year have been set by Western leaders, not Asian ones.

But events of the past year brought into sharp focus a rise in populist denunciations of globalisation, free trade and inequality in some Western nations, including the United States, with Davos frequently mentioned by critics as a symbol of the root causes of their countries' ailments.

China has benefited greatly from access to international trade markets since its entry in 2001 into the World Trade Organisation, and it could now become the most vocal proponent of that system.  Trump campaigned on opposition to the existing global trade system and has denounced China for competing unfairly against the United States.

At Davos, Xi plans to lead a delegation of senior officials, China's wealthiest entrepreneurs and top executives of state-owned enterprises, including the China Poly Group Corporation, which has ties to the Chinese military.

His appearance is a logical step in his country's evolution into a globe-spanning superpower, a rapid transformation that has been marked by bold symbolic gestures and events in the past decade, including the 2008 Summer Olympics in Beijing under President Hu Jintao, Xi's predecessor.

Xi has carried on that theme with much more aggressive actions, including overseeing construction of military infrastructure in the South China Sea's contested waters and establishing a regional lending bank opposed by the United States.

Premiers of China, including the current one, Li Keqiang, have attended Davos before, but the nation's president - and head of the Communist Party - has never been to the gathering.

''Clearly it signals that Xi Jinping is now interested in writing both China and himself in a grander way on the global diplomatic horizon,'' Orville Schell, director of the Center on US-China Relations at the Asia Society, told the NYT. ''He feels it's time to really come out. Behind that probably is an assumption and wishful thinking that the US is in disarray, Europe is feckless, and so on.

''He'll be received almost as the number one citizen at Davos,'' Schell added.

Xi plans to attend Davos on 17 January, during a three-day state visit to Switzerland, said Lu Kang, a foreign ministry spokesman, at a regularly scheduled news conference in Beijing on Tuesday. Xi is expected to speak at the opening session of the forum, which runs from 17 to 20 January.

Among the Chinese tycoons expected to attend Davos are Wang Jianlin, founder of the Wanda Group, a property and cinema company, and Jack Ma, founder of the Alibaba Group, China's biggest e-commerce company.

They are commonly referred to as the two wealthiest men in China. Both are investing in the United States, and Ma met with Trump on Monday at Trump Tower in New York to discuss business opportunities between companies in the two countries. (Within Trump's family, his son-in-law, Jared Kushner, has been involved in personal business negotiations with top Chinese executives.)

Some members of the Congress, mostly Republicans, have called for greater scrutiny of Chinese investments in the United States, including those by Wanda, which recently bought the AMC movie theatre chain and Legendary Entertainment, a film production and financing company.