Banca Monte dei Paschi di Siena SpA, Italy's third-largest lender and the world's oldest, has sought government bail-out after its plans to raise €5 bn from investors through the sale of shares failed. 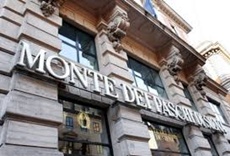 The bank, which was founded in 1472, has roughly €28 billion ($29.3 billion) in bad debts that it has been trying to spin off into a separate entity as part of a turnaround plan.

Monte Paschi said in a statement it will now ask the government for a ''precautionary'' capital increase, following the investor snub after the bank's eroding profitability made it unattractive.

Reports had earlier said the Italian government was thinking of nationaliing Monte Paschi, which could be the biggest in Italy since the 1930s. But this would necessitate nationalisation of other lenders, including Veneto Banca SpA and Banca Popolare di Vicenza.

Like Mote Pasche, most of Italy's banks are struggling under the weight of a €360-billion mountain of bad loans and the Italian government is readying a €20 billion ($21 billion) war chest for recapitalisation of thes banks.

"We will see if other banks ask for aid,'' Italian finance minister Pier Carlo Padoan told reporters after a cabinet meeting in Rome.

Under the €20-billion euro bailout plan, the Italian government will provide both emergency liquidity guarantees and capital injections to banks in precautionary recapitalizations that would absorb some of these banks holdings of government bonds.

The trigger came after Monte Paschi on Wednesday said that it may run out of liquidity after four months, sooner than the 11 months forecast just a week earlier. An on Thursday, it abandoned plans to raise 5 billion euros from the market. The bank said it was scrapping the entire capital program, including a sale of bad loans and a debt-for-equity swap.

Monte Paschi has been looking at investors around the world, including Qatar's sovereign-wealth fund, to back the bank's reorganization plan, which included a share sale, the debt-for-equity swap and the sale of 28 billion euros of soured loans.

Investors, however, held off on committing to buy shares, indicating that they would not put funds in the troubled bank.

Monte Paschi's stock has plunged 87 per cent this year, closing at €15.08 in Milan on Thursday, the lowest since it began trading in 1999, taking the company's market cap to a low of about €442 million.

Italy's banks have been struggling with high costs and low returns for years. The country's lenders are saddled with about €360 billion ($376 billion) in non-performing loans, roughly a third of the eurozone total.

Earlier this month, Italy's biggest bank, UniCredit, announced plans to raise €13 billion ($13.6 billion) and slash thousands of jobs to shore up its finances.