Exxon Mobil chief executive Rex Tillerson has emerged as the top candidate for the post of secretary of state in donald Trump's administration, The Washington Post reported citing two people familiar with the deliberations. 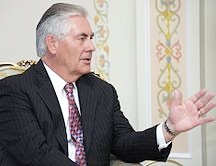 Tillerson, an unconventional pick for the job, is expected to bring deal-making skills to the position. Both Tillerson and Romney are business executives with international experience.

While Tillerson had a clean slate politically, Romney's candidacy was marred, as some Trump supporters thought the former governor had crossed the line in his opposition to Trump during the campaign.

However, Tillerson's business dealings and ties to Russia, could come in the way of his nomination.

As CEO of Irving-based Exxon Mobil, the world's largest publicly-traded company, Tillerson had struck deals with Russia for drilling rights, which had been soured by US sanctions against Moscow with Russia's invasion of Crimea and its actions in Ukraine.

According to Joshua Rovner, director of the strategy and security program at the SMU Tower Center, who spoke to The Dallas Morning News last week, Tillerson's suitability for the post depended on what Trump thought the duties of the secretary of state ought to be.

As Exxon's top official, Tillerson had extensive experience working with foreign leaders and according to commentators, some of his foreign relationships, especially those with Russia, could come under particular scrutiny during a Senate confirmation hearing.

Tillerson, who met with Trump last Tuesday at Trump Tower in New York, had been strongly recommended by a number of business leaders. It was not clear as yet  when Trump expected to announce his choice for the job.