Democratic Party presidential nominee Hillary Clinton called up Republican rival Donald Trump to congratulate hime and concede defeat, as he reached 266 Electoral  College votes out of 270 to Clinton's 218. Counting in remaining states was still on with Trump leading, when Clinton called him to concede defeat. 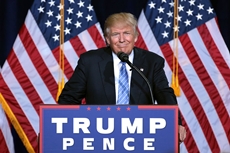 Trump will now be elected America's 45th president Tuesday, an astonishing victory for a shock-and-awe political novice and rank outsider who capitalized on voters' economic anxieties.

His presidency begins in 72 days from today.

Throughout his campaign, Trump single-mindedly focused on the vast majority of non-collegiate, economically weak white American males, to the exclusion of blacks, Hispanics and women.

He took advantage of racial tensions and several allegations of sexual assault on his electoral victory to the White House.

His triumph over Clinton ends eight years of Democratic dominance of the White House.