A Bangladeshi tycoon who was a chief financier for Bangladesh's largest Islamist party could be executed in days after losing his final appeal today against a death sentence from a controversial war crimes tribunal. 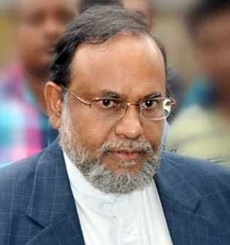 The Bangladesh Supreme Court rejected Mir Quasem Ali's last attempt to overturn the death penalty handed down two years ago by the tribunal for murders committed during Bangladesh's 1971 independence conflict.

"Now he has a chance to seek presidential clemency. Or else the verdict could be executed anytime whenever the state wants," Attorney General Mahbubey Alam told reporters in Dhaka.

Since 2013 five opposition leaders including four leading Islamists have already been executed for the 1971 war crimes. They were all hanged just days after their appeals were rejected by the Supreme Court.

Their families said they had refused to seek a presidential pardon as they did not want to legitimise the whole trials process.

Ali, who became a shipping and real estate tycoon, was convicted in November 2014 of a series of crimes during Bangladesh's war of separation from Pakistan, including the abduction and murder of a young independence fighter.

Tuesday's decision is considered a major blow for the Jamaat-e-Islami party, which the 63-year-old Ali had helped revive by setting up charities, businesses and trusts linked to it after it was allowed to operate in the late 1970s.

His son Mir Ahmed Bin Quasem, who was part of his legal defence team, was allegedly abducted by security forces earlier in August, which critics say was an attempt to sow fear and prevent protests against the imminent execution.

Security was tight in Dhaka today, even though the party has in recent months eschewed violent protests in reaction to war crimes verdicts and there was no immediate sign of unrest.

The war crimes tribunal set up by the government has divided the country, with supporters of Jamaat and the main opposition Bangladesh Nationalist Party (BNP) branding them a sham aimed at eliminating their leaders.

The executions and convictions of Jamaat officials plunged Bangladesh into one of its worst crises in 2013 when tens of thousands of Islamist activists clashed with police in protests that left some 500 people dead.

The Islamist party, which is banned from contesting elections, called a nationwide strike for Wednesday, calling the charges against Ali "false" and "baseless" and accusing the government of exacting "political vengeance".

Before he was arrested in 2012 on 14 war crimes charges, Ali headed the Diganta Media Corporation, which owns a pro-Jamaat daily and a television station that was shut down in 2013 for stoking religious tensions.

Defence lawyers have said the charges against him were baseless.

"Mir Quasem Ali wasn't directly involved in war crimes. False witnesses were provided to frame charges against him. The future generation and law experts will scrutinise the verdict whether it was justified," Khandker Mahbub Hossain told AFP.

The court ruling comes a day after a visit to Dhaka by US Secretary of State John Kerry who said the best way to combat extremism was "to live up to the core values of democracy".

Bangladesh has been hit by a series of deadly assaults by Islamist extremists in recent months, including a horrific attack on a Dhaka cafe in July in which 22 people, mostly foreigners, were killed.

Rights groups have criticised the war crimes trials, saying they fall short of international standards and lack any foreign oversight.

A group of United Nations human rights experts last week urged Bangladesh to annul Ali's death sentence and to retry him in compliance with international standards.

"International law, accepted as binding by Bangladesh, provides that capital punishment may only be imposed following trials that comply with the most stringent requirements of fair trial and due process, or could otherwise be considered an arbitrary execution," they cautioned.

Prime Minister Sheikh Hasina's government has defended the trials, saying they are needed to heal the wounds of the conflict, which it says left three million people dead.

Bangladesh's independence war broke out, with Jamaat opposing the struggle and siding with the military regime in Islamabad.

Independent researchers estimate that between 300,000 and 500,000 people died in the 1971 war to end Pakistani rule in what was then East Pakistan.