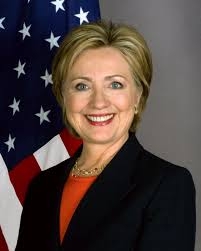 In two of the states - both carried twice by President Barack Obama - the Democratic nominee leads by double-digit margins.

In Colorado, Clinton leads by 46 per cent to 32 per cent, widening the 8 percentage point lead she held before the two parties' political conventions.

In Virginia, the former secretary of state leads the real estate magnate by 46 per cent to 33 per cent, widening her 9 point pre-convention lead. Clinton strengthened her position in the state by selecting Virginia Sen Tim Kaine as her running mate.

In North Carolina, an increasingly diverse state that Obama carried in 2008 but lost in 2012, Clinton leads by 48 per cent to 39 per cent, widening her 6-point pre-convention lead.

And in Florida - a critical swing state in recent elections - Clinton leads by 44 per cent to 39 per cent. That represents a narrowing of the 7-point lead she held before the two conventions.

All four telephone surveys were conducted 4 to 10 August. The margin of error for the Colorado, Florida and Virginia surveys is 3.3 percentage points; for North Carolina, it is 3.2 points.