On the eve of Monday's Republican Party convention, Hillary Clinton maintained a five-point national lead over Donald Trump even after a period of negative news for the presumptive Democratic nominee, according to a new NBC News/Wall Street Journal poll. 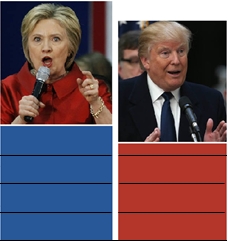 Clinton leads the presumptive GOP (Grand Old Party) nominee 46 per cent to 41 per cent in a poll that finds both candidates facing sizable disadvantages and challenges ahead of the party conventions which kick off Monday for the Republicans in Cleveland and a week later for Democrats in Philadelphia.

Those numbers are unchanged from one month ago with the poll conducted after FBI Director James Comey strongly rebuked Clinton over her email practices even though he determined that she had not committed a crime. The poll was also conducted before Trump selected Indiana Governor Mike Pence as his vice-presidential running mate.

In a four-way ballot test - including Libertarian nominee Gary Johnson and the Green Party's Jill Stein - Clinton gets 41 per cent, Trump 35 per cent, Johnson 11 per cent, and Stein 6 per cent.

McInturff agrees. "Our overall ballot is very stable, and the contours of this election are becoming stable."

Trump heads into the Republican convention with a 27 per cent positive/60 per cent negative score (-33) - remaining the most unpopular presumptive presidential nominee in the history of the NBC/WSJ poll.

But he's followed closely by Clinton's 34 per cent positive/56 per cent negative score (-22).

'Voters hate them both'
"Let me summarize the poll into four little words: 'They hate them both,'" says Democratic pollster Fred Yang of Hart Research Associates.

Email controversy fallout
As for Clinton and her own convention in Philadelphia that begins a week from Monday, the poll shows that the email controversy has taken a toll on her candidacy.

Fifty-five per cent of all voters say her use of a private email server is important to their vote - up from 42 per cent who said this in late Oct. 2015 after her testimony before the House Benghazi Committee.

In addition, half of voters - 50 per cent - say she doesn't have the right judgment to make a good president based upon what they know about the FBI investigation into her email practices, versus 33 per cent who say she has the right judgment.

"The questions about Mrs Clinton's character and honesty are important obstacles, and the decision by the FBI so far hasn't ended the issue for the public," adds Yang, the Democratic pollster.

Also, a number of voters (43 per cent) believe the FBI investigation was unfair and too partisan, versus 37 per cent who say it was fair and impartial.

Another weakness Clinton has heading into her convention is the country's desire for change.

In the poll, 56 per cent of voters prefer a presidential candidate who will bring major changes to the government, even if they're unpredictable. By contrast, 41 per cent want a steady approach, even if it means fewer changes.

The Obama factor
Yet Clinton has one major advantage Trump doesn't - a popular president who's willing and eager to campaign for her.

President Obama's job-approval rating in the poll is at 51 per cent - the third-straight NBC / WSJ poll in which his approval has been above 50 per cent.

Additionally, 49 per cent believe the economy has improved during Obama's presidency and they give him credit for it, while another 15 per cent acknowledge that it's improved but don't give the president credit.

Just 36 per cent of votes say the economy hasn't improved during Obama's presidency.

"President Obama remains the most important person over the next 115 days," says Hart, the Democratic pollster.