Ratings agency Moody's has downgraded the UK's credit rating outlook to "negative" after the country voted to leave the European Union, which Moody's said would herald "a prolonged period of uncertainty". 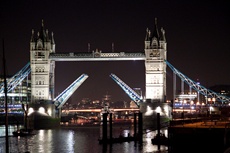 Meanwhile, Prime Minister David Cameron is under pressure to speed up "divorce" talks with the EU after Brussels said exit negotiations should start immediately.

Jean-Claude Juncker, head of the EU, said it was "not an amicable divorce", but it was "not a tight love affair anyway".

Moody's said the referendum result would have "negative implications for the country's medium-term growth outlook", and it lowered the UK's long-term issuer and debt ratings to "negative" from "stable".

It added, "In Moody's view, the negative effect from lower economic growth will outweigh the fiscal savings from the UK no longer having to contribute to the EU budget."

It also said the UK had one of the largest budget deficits among advanced economies.

Colin Ellis, chief credit officer at Moody's, told BBC Radio the UK's credit rating could have an impact on UK households in the long term.

"The government borrowing rate is normally the benchmark - it is the rate at which other interest rates in the economy are set," he said.

"A lower rating would typically correspond to higher borrowing costs, and that would be felt not just by the government but by businesses and households in the longer term."

The financial assessment came after the UK voted to leave the EU in historic referendum on Thursday.

Cameron had urged the country to vote Remain in Thursday's referendum but was defeated by 52 per cent to 48 per cent.

On Friday morning, he stood outside 10 Downing Street alongside his wife Samantha to announce he would remain in place for the short term and then hand over to a new prime minister by the Conservative conference in October.

He said he would attempt to "steady the ship" over the coming weeks and months.

However, the PM said it would be for a new prime minister to carry out negotiations with the EU and invoke Article 50 of the Lisbon Treaty, the formal procedure that will take Britain out of the EU, a process that will take a minimum of two years.

But in an interview with German TV, European Commission President Jean-Claude Juncker said, "Britons decided yesterday that they want to leave the European Union, so it doesn't make any sense to wait until October to try to negotiate the terms of their departure - I would like to get started immediately."

'Back of the queue'
He said the EU would pursue a "reasonable approach" in negotiating the separation.

Earlier, Cameron was given assurances from US President Barack Obama that the UK would remain "an indispensable partner".

In a telephone call, the US leader told Cameron that he regretted the PM's decision to step aside, saying he was "a trusted partner and friend".

A White House spokesman later said Obama "stands by what he said" about the UK going to "the back of the queue" when it comes to trade deals with the US.

He gave the warning while on a visit to the UK during the referendum campaign.

The result of the referendum - which saw more than 30 million people turn out to vote - saw British bank shares lose nearly a third of their value before rallying on Friday afternoon.

Retailers and the AA motoring organisation warned that petrol prices were likely to rise by 2p-3p a litre because of the pound's fall against the dollar.

Boris Johnson, the leading voice in the Leave campaign, is favourite to be the next Tory leader and prime minister, although he has yet to announce his candidacy, with Home Secretary Theresa May also seen as being in the running.

Britain's vote to quit the EU has also prompted fresh calls for Labour leader Jeremy Corbyn to resign, amid claims he did not do enough to convince Labour supporters to vote for Remain.

The referendum result could also trigger a second independence referendum in Scotland, which wants to stay in the EU.

First Minister Nicola Sturgeon said it was "democratically unacceptable" to force Scotland, which voted strongly to remain in the EU, out of the bloc against its will.

A meeting of 27 EU leaders has been scheduled for Wednesday to discuss Britain's exit - but Cameron is not invited.