Britain today celebrated the 90th birthday of Queen Elizabeth II with gun salutes and fireworks, and Prime Minister David Cameron paying tributes to the world's oldest and longest-serving monarch, calling her a "rock of strength" for the country and the Commonwealth. 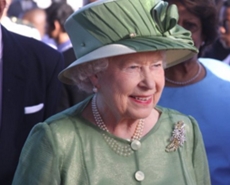 Prince Charles, the Queen's heir, recorded a special birthday message for his mother in which he reads an edited passage from William Shakespeare's Henry VIII for radio broadcast during the day.

Queen Elizabeth's 90th birthday was marked with beacons and gun salutes for the monarch, who still performs hundreds of engagements a year and shows no signs of losing her appetite for the job.

Usually her birthday passes with little ceremony but to mark today's landmark Elizabeth greeted well-wishers near her Windsor Castle home, west of London, and later lit a beacon, the first of 1,000 to be lit across the country and worldwide to mark the occasion.

There were also artillery gun salutes in the British capital at Hyde Park and the Tower of London, while parliament was illuminated red, white and blue.

"It's really sinking in now ... just how much of a major milestone it is to have the queen celebrating her 90th, and after everything she's achieved it's quite a moment for the family," her grandson and future king Prince William said in a Sky News interview broadcast on Wednesday.

Close aides say Elizabeth, who has been on the throne for 64 years, was far more interested in events to mark her 90th birthday than she had been about overtaking her great-great-grandmother Queen Victoria last September as Britain's longest-reigning monarch.

In May, there will be a four-day pageant at Windsor Castle, while in June there will be further events to mark her official birthday, including the Patron's Lunch, a street party for 10,000 guests on the Mall, the grand avenue leading to Buckingham Palace.

Born on 21 April 1926 in Bruton Street in central London when Calvin Coolidge was US President and Joseph Stalin had just taken control in the Soviet Union, Elizabeth shows no signs of retiring, and two surveys last week suggested the public did not want her to give up either.

An Ipsos MORI poll found 70 per cent wanted her to stay queen compared to 21 per cent who thought she should abdicate or retire, while a BMG survey for the London Evening Standard newspaper showed 66 per cent of Britons had a favourable view of her compared to 10 per cent with a negative opinion.

"You can't put your feet up. There is no pension plan in this job," the queen's youngest son Prince Edward told Sky.

Prime Minister David Cameron led political tributes in a "humble address" in parliament, an occasion which was a little awkward for opposition Labour leader Jeremy Corbyn, an ardent republican.

"She has served our nation with such dignity, with such ability for so many years. I know the whole country and the whole House (of Commons) will want to join me in saying 'long may she reign over us'," Cameron said on Wednesday.

On Friday, the queen will be back to her usual official duties hosting a lunch at Windsor for US President Barack Obama who described her as "a source of strength and inspiration not only for the people of Britain but for millions of people around the world" in a British TV documentary aired last month.

(Also see the speech Prime Minister David Cameron gave in parliament to mark the 90th birthday of Queen Elizabeth: 'My whole life whether long or short shall be devoted to your service')