Brazil's Roussef stares at end as ally breaks away

Even a few weeks ago, Brazilian President Dilma Rousseff was largely expected to survive an impeachment effort against her. 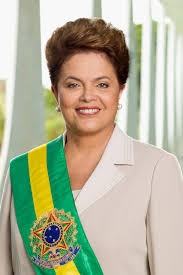 That all changed on Tuesday, when the nation's biggest political party, the Brazilian Democratic Movement Party, split from the governing coalition that has so far kept Rousseff afloat.

Without its support, Rousseff looks increasingly unlikely to stave off the two-thirds vote of both houses of congress needed to impeach her.

Rousseff has been terribly unpopular for at least a year. Opinion polls show her public approval hovering around 10 per cent. And the last 12 months have been spectacularly brutal for her: The economy is imploding; multiple corruption investigations are ensnaring - and jailing - rich and powerful politicians and business execs; and the Zika crisis is exposing drastic problems with health care.

The president faces numerous impeachment efforts, including for allegedly manipulating the budget to boost public spending in order to look good for the 2014 elections, which she denies. But that's not all.

What analysts say really tipped the balance was Rousseff's attempt in mid-March to appoint her predecessor, Luiz Inacio Lula da Silva, as cabinet chief of staff. The former president, popularly known as Lula, is being investigated for suspected links to the huge corruption scandal surrounding the state oil company Petrobras. So, many Brazilians got angry about the possibility that he was merely trying to dodge prosecution with the special privileges enjoyed by government ministers.

It set off massive protests, and even prompted the Brazilian Bar Association to file yet another impeachment request. It also apparently angered Rousselff's big governing party partner. And so it split.

Rousseff's own vice president, Michel Temer, belongs to the party that just dumped her. If Rousseff is impeached, Temer will be her successor.

The fear among government supporters and, more broadly, Brazil's left wing, is that her impeachment could therefore usher in more fiscally conservative leaders, of whom Temer would be the first. According to recent media reports, Temer's party is already planning drastic reforms, including cutbacks to the hefty social spending and benefits of Lula and Rousseff.

But there is a further twist: the vice president himself is being investigated for alleged corruption, too.

Let it be noted, although Rousseff is accused of fiscal impropriety, it's not for padding out her personal finances from corruption. The accusations against Rousseff make her appear pretty clean in comparison with some of the people calling for her ouster, as the LA Times reports.

That's led commentators including Rio-based journalist Glenn Greenwald to liken her impeachment to a de-facto coup by Brazil's right-wing power-brokers.

Perhaps fuelling this theory, the country's main stock and currency exchanges have rejoiced with each development seeming to inch Rousseff closer to her downfall.

Heloisa Galvăo, a Brazilian resident in Boston, is afraid of what she's seeing in her home country, whose democracy is little more than 30 years old.

''I hear from a lot of people who are advocating for impeachment that they miss the dictatorship. I don't understand that,'' Galvăo told PRI's The World on Wednesday.

''So far there is no proof that she is involved in the corruption. And I think this a struggle for power. I don't think she's a strong president but I think she was elected,'' said Galvăo, who co-founded the Brazilian Women's Group in Boston.

All this is happening just months before the world turns its attention to Rio de Janeiro, host of the Summer Olympic Games. Despite the political and economic turmoil, several experts recently said that the Olympics should not be impacted. While things seem chaotic, they said, the country's major institutions are holding up.

If the past few months have shown anything, however, it's that political fortunes in Brazil can turn on a dime. And with more than three out of five federal politicians under some form of criminal investigation, the rest of 2016 looks crucial.