US rail operator Norfolk Southern Corp has rejected a $28-billion hostile takeover offer from Canadian Pacific Railway Ltd terming it as ''grossly inadequate and not in the best interests'' of the company and its shareholders. 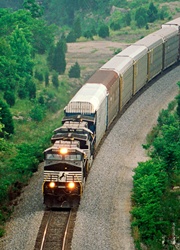 Over a fortnight ago, Canadian Pacific offered to buy Norfolk Southern for $46.72 a share in cash and 0.348 shares in a new combined company, giving a valuation of around $97 a share.

The deal, at an enterprise value of around $37.8 billion, would have created a transcontinental rail company and would have resulted in the second-largest merger in the global transportation business.

Further to the news, Norfolk Southern stock fell almost 7 per cent before recovering to $92.09, down 1.1 per cent yesterday in New York. Shares in Calgary-based Canadian Pacific dropped 4.6 per cent to close at $134.49.

The company's board also raised concerns over regulatory approvals for the combination and said it could function better as an independent company.

Norfolk Southern CEO James Squires said in a statement: "There is a high probability that, after years of disruption and expense, the proposed combination would be rejected by the surface transportation Board.''

''Even if the proposed combination were ultimately to be cleared, it would be subject to a wide range of onerous conditions that would reduce the value of the stock consideration that has been proposed,'' Squires added.

Virginia-based Norfolk Southern is a freight rail operator transporting goods primarily in the southeast, east and mid-west through a network spanning 21,000 rail miles in 22 states.

A spokesman for Canadian Pacific said the company is reviewing the Norfolk response and have no further comment at this time.

Norfolk Southern has been severely hit by the downturn in the North American coal mining industry, which has been one of its biggest customers.

In the third quarter, the company lost 11 per cent of its revenue and 19 per cent of its profit compared to a year ago quarter. Sales were down at $2.7 billion and net income declined to $452 million for the quarter.

"We are implementing various strategic reductions and network rationalisations to respond to these structural changes," Squires said on a conference call.

Norfolk Southern said its strategic plan, which includes growth investments and operational improvements in the next five years, would result in increased returns and earnings growth.

The board considers Canadian Pacific's offer is opportunistically timed to take advantage of a Norfolk Southern market valuation that has been adversely affected by a challenging commodity price environment, and does not fully reflect infrastructure investments Norfolk Southern has made.