A `hard landing' by the slowing Chinese economy and a downturn in the commodity markets combined with the US Federal Reserve's move to push up interest rates could plunge the world economy into recession in the next two years, say policy makers at Citi Group. 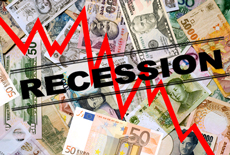 Willem Buiter, chief global economist at Citi Group and a former Bank of England policymaker, has said the downturn would be driven by waning demand from the fragile Chinese economy, which, Citi believes, is heading for a crash.

A research note issued by Citi's experts warns of a 55 per cent probability of global recession.

The warning comes as the Federal Reserve in Washington prepares to decide next week whether to go ahead with a planned rate hike despite warnings of economic fragility.

''We consider China to be at high and rapidly rising risk of a cyclical hard landing,'' Buiter said in the note. ''Should China enter recession – and with Russia and Brazil already in recession – we believe that many other emerging markets, already weakened, will follow, driven in part by the effects of China's downturn on the demand for their exports, and, for the commodity exporters, on commodity prices.''

''We believe that a moderate global recession scenario has become the most likely global macroeconomic scenario for the next two years or so,'' says Buiter.

Several economists have predicted a global recession, mostly sensing the mood among investors, which has calmed since the August market fall, following evidence of China's slowdown.

''Economists seldom call recessions, downturns, recoveries or periods of booms unless they are staring them in the face. We believe this may be one of those times,'' says Buiter.

The City economists says China has created a messy economy and is sceptical of Beijing's ability to mitigate the looming crisis, after a series of panic interventions in recent weeks failed to stem stock price declines and boost growth.

China's weakness is already rippling through markets, through sharp declines in GDP growth among emerging economies, the downturn of global trade and low commodity prices and inflation, he says. ''The evidence for a global slowdown is everywhere.''

According to Buiter, authorities in developed countries have nothing to fall back on as policy support, given that interest rates are already close to zero, and high debt levels of governments are too high to loosen public purse strings further.

Several economists, including World Bank chief economist Kaushik Basu, have cautioned against a rate hike by the Fed at a time when the global financial markets are in a mess.