The United Nations (UN) has warned that the world will suffer a 40-per cent shortfall of potable water in 15 years unless people and nations dramatically change the way they use the resource. 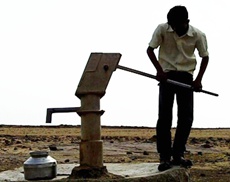 In its World Water Development Report 2015 released yesterday in New Delhi, two days before World Water Day, the UN forecasts global water demand will increase 55 per cent by 2050 as the world population is expected to reach around 9 billion and water resources will dwindle.

The demand growth will be influenced by population growth, urbanization, food and energy policies, industrialization and globalization, changing diets and increasing consumption.

Over the past several decades, ever-growing demands for – and misuse of – water resources have increased the risks of pollution and severe water stress in many parts of the world.

Current growth rates for global agricultural water demand are unsustainable, and the sector will need to increase its water use efficiency by reducing losses and increasing crop productivity.

By 2050, we need to produce 60 per cent more food globally, and 100 per cent more in developing countries. Demand by the manufacturing industry is expected to increase 400 per cent from 2000 to 2050, mainly in emerging economies.

The report calls for policy makers and communities to rethink water policies urging more conservation as well as recycling of waste water. It also suggested considering a pro-poor pricing policy for water to support maintenance and expansion of the system, as well as looking for ways to make water-intensive sectors more efficient and less polluting.

Groundwater supplies are diminishing, with an estimated 20 per cent of the world's aquifers currently over-exploited.

India, China, Nepal, Bangladesh and Pakistan alone account for nearly half the world's total groundwater use, the report noted.

In many countries including India, water use is largely unregulated and often wasteful.

Pollution of water is often ignored and unpunished. At least 80 per cent of India's population relies on groundwater for drinking to avoid contaminated surface waters.

In agriculture-intense India, where some aquifers are being depleted at the world's fastest rates, the shortfall has been forecast at 50 per cent or even higher. Climate change is expected to make the situation worse, as higher temperatures and more erratic weather patterns could disrupt rainfall.

Sustainability in the Asia and the Pacific region is intimately linked with progress in access to safe water and sanitation; meeting water demands across multiple uses and mitigating the concurrent pollution loads; improving groundwater management; and increasing resilience to water-related disasters.

''The global water crisis is one of governance, much more than of resource availability, and this is where the bulk of the action is required in order to achieve a water secure world,'' the report said.

Water-related disasters are likely to increase with climate change which need be tackled with proper planning, coordinated responses including floodplain management, early warning systems and increased public awareness of risk is needed to manage the situation.

The report estimates an investment of around $53 billion a year over a five-year period would for water and sanitation services to achieve universal coverage, which it said is only a very small fraction of the global GDP.

According to the report, about 748 million people worldwide have poor access to drinking water cautioning that economic growth alone is not the solution - and could make the situation worse unless reforms ensure more efficiency and less pollution.