A Bangladesh court has issued a warrant for the arrest of opposition leader and former Prime Minister Khaleda Zia, amid a political stand-off in the country. 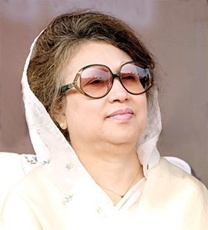 The court in Dhaka issued the warrant after Zia failed to appear in connection with a corruption case.

Judge Abu Ahmed Jamadder issued the warrant in a makeshift court in the nation's capital after he refused a bail plea by the defence, which sought more time saying Zia was sick and concerned over her security because of the ongoing political unrest.

Zia's lawyers have rejected allegations that she had illegally collected more than $1 million in donations for the charity. Zia says the charges are politically motivated, which authorities deny.

Her party is engaged in a major confrontation with Prime Minister Sheikh Hasina's government. Last month Zia urged her supporters to go on strike and block roads and railways to force Hasina to call fresh elections. Since then at least 100 people have died in clashes around the country.

The BNP boycotted polls in January 2014, saying they would be rigged.

It was not clear immediately whether Zia will soon be arrested. The court order will go to a police station where the cases were registered.