Dramatic pictures of the former Maldives president Mohammad Nasheed being pushed to the ground by police outside a Male court prompted a statement from India on Monday, a day after the island nation was plunged into a fresh political crisis. 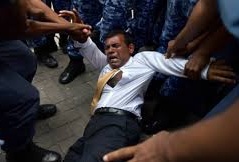 "We are concerned at recent developments in the Maldives, including the arrest and manhandling of former President Nasheed,'' said a statement from the ministry of external affairs.'' The ''manhandling'' occurred when Nasheed, who was arrested on Sunday on charges of terrorism, was brought to the criminal court in Male.

On his way in, Nasheed was seen stopping to speak to journalists, which the accompanying security forces objected to. When Nasheed protested he was dragged by the police, and seen falling to the ground.

''We urge all concerned to calm the situation and resolve their differences within the constitutional and legal framework of Maldives," ministry spokesman Syed Akbaruddin said.

India reiterates its commitment to supporting the people and the government of Maldives in their quest for peace, development, prosperity and democracy, he added.

While India had not reacted to the arrest on Sunday, it is significant that Monday's statement refers to concern over both the ''arrest and manhandling'' of the former president.

Last week, Maldivian foreign minister Dunya Maumoon had in a statement said that her government had ''no doubt that India will adhere to the principle of Panchsheel and will not intervene in the domestic politics of Maldives.''

Prime Minister Modi is expected to visit Male in mid-March and the turmoil in the country would have an impact on his visit.

Nasheed, who was arrested under anti-terrorism laws for allegedly ordering the arrest a senior judge in 2012, was virtually dragged by the security forces to be presented before the criminal court, which ruled that the opposition leader will remain in custody until the case against him was complete.

Inside court, Nasheed's bail application was also rejected, and he will be imprisoned till the end of his trial, where he will have to plead his own case.

''This arrest and detention is completely arbitrary and is clearly and blatantly politically motivated,'' claimed Nasheed's lawyer Hisaan Hussein in a statement.

The case against Nasheed dates back to when he was president in 2011, and he was accused of illegally ordering the detention of a judge. Several other members of his party have been charged as well.

In its statement, the external affairs ministry said that India ''urges all concerned to calm the situation and resolve their differences within the constitutional and legal framework of Maldives.''