China today cautioned foreign countries against hosting the Dalai Lama and ''interfering in its domestic affairs'' on the Tibet issue, a day after US President Barack Obama and the exiled Tibetan spiritual leader appeared together in public for the first time. 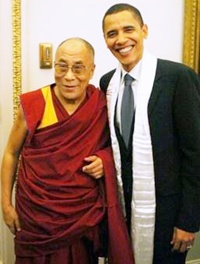 "We are against foreign countries interfering in China's domestic affairs under the pretext of Tibet-related issues," Chinese foreign ministry spokesman Hong Lei told reporters. "The Dalai Lama is seeking support from foreign counties to realise his political end, but he cannot succeed."

Hong added, "The Dalai Lama is a political exile who has long been engaged in anti-China separatist activities under the pretext of religion."

Obama has bet the Dalai Lama three times before, but this is the first time he Obama and the Tibetan spiritual leader have been seen together in public. The previous encounters have been held behind closed doors.

"I want to offer a special welcome to a good friend, his Holiness the Dalai Lama, who is a powerful example of what it means to practice compassion and who inspires us to speak up for the freedom and dignity of all human beings," Obama said.

Previous meetings of Obama with the Dalai Lama too have been met with fierce Chinese protests and some of the foreign leaders had dodged their meetings with the 79-year-old monk altogether.

Most recently, Pope Francis had refused to grant an audience to the Dalai Lama for fear of offending China. South Africa has repeatedly denied visa to the monk following protests by China.

China has toned down its criticism of India for permanently hosting the Dalai Lama, no doubt for eco-political reasons. At the same time, New Delhi is careful to avoid official contact with him.

The 14th Dalai Lama who fled Tibet in 1959 after a failed uprising against Chinese military occupation in his Himalayan homeland and has lived in exile in India ever since. He was awarded the Nobel Peace Prize in 1989.

The Chinese media, almost entirely state-controlled, elaborated on the official criticism of Obama hosting the Dalai Lama in a number of commentaries.

Video footage of the meeting showed Obama clasping his hands together in a gesture of reverence and then waving at the Dalai Lama with a broad smile. In another unmistakable sign of White House support, Valerie Jarrett, a senior presidential adviser, shared a table with the Dalai Lama.

In a commentary Friday, the state-run news agency Xinhua accused Obama of cynically orchestrating an encounter and suggested that it was designed to complicate China's governance of Tibet - a vast, strategically important region that was used as a base by China to launch its war on India in 1962, even as Nehru and his defence minister Krishna Menon remained purblind to the development.

The commentary referred to ''America's infatuation with using the Dalai Lama as a chess piece in an attempt to seize the Tibet 'corner,' '' and said ''This action by the US to 'drive a nail' into the hearts of Chinese people is harmful to the political trust between the two countries, and it is harmful to the premise and foundation of both sides building a new relationship.''