Lanka President Rajapaksa loses to Sirisena after decade in power

Sri Lanka's president Mahinda Rajapaksa today conceded defeat to rival Maithripala Sirisena in the country's election, bringing an end to a decade of leadership increasingly criticized as corrupt and nepotistic. 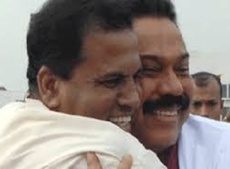 Although votes were still being counted this morning, it was clear that Rajapaksa had lost.

He acknowledged the defeat on his official Twitter account, writing, "I value and respect our democratic process and the people's verdict, and look forward to the peaceful transition of power."

Rajapaksa's defeat was the result of a failed electoral gamble. In November, the 69-year-old called elections two years earlier than required, only to be shocked by the defection of many key political allies, including the man who would unseat him.

The surprise defection apparently wrong-footed Rajapaksa, and the opposition had the better of the campaign, say analysts.

Sirisena, 63, served as general-secretary of Rajapaksa's Sri Lanka Freedom Party and health minister in his cabinet, before unexpectedly defecting to a broad opposition alliance that proved to be the most serious presidential challenge.

A farmer-turned-parliamentarian, Sirisena comes from a humble background in the rice-producing North Central Province -- credentials that apparently appealed to Rajapaksa's political base in the Sinhalese heartland.

"He's a Sinhala Buddhist from a peasant background -- you can't get more mainstream than that in Sri Lankan politics," one commentator said.

But he also had the backing of the country's substantial Tamil and Muslim minorities, who had been alienated by Rajapaksa's perceived failure to advance national reconciliation efforts in the wake of the country's decades-long civil war, and his perceived tolerance of hardline Buddhist extremists blamed for stoking anti-Muslim violence.

Rajapaksa was elected president in 2005 and returned to office in 2010, a year after government forces routed the Tamil Tiger rebels to end the country's 25-year civil war.

The victory remained his main political asset despite the widely reported brutality with which he finally suppressed the rebels; but in recent years, his lustre seemed to have faded for voters, with criticisms that his presidency had become increasingly authoritarian, power-hungry and dynastic.

Three of Rajapaksa's brothers occupy powerful positions: Basil is the minister of economic development, Gotabaya is defence secretary and Chamal is the Speaker of Parliament.

Following his 2010 re-election, in which he earned a thumping 58 per cent of the vote, an emboldened Rajapaksa amended the constitution to concentrate power in the presidential office and remove term limits, allowing for a tilt at an unprecedented third term.

Many Sri Lankans felt the move to be abuse of power.

The opposition campaign focused on those weak points, attacking Rajapaksa for his apparent nepotism. He pledged to weaken the powers of the president, crack down on corruption, and hold fresh a parliamentary election within 100 days.

World leaders were quick to offer their congratulations to President-elect Sirisena.

Indian Prime Minister Narendra Modi tweeted that he had called Sirisena, and congratulated "the people of Sri Lanka on the peaceful & democratic poll process."

US Secretary of State John Kerry congratulated Rajapaksa on accepting the results "in the proud tradition of peaceful and orderly transfers of power," and said he looked forward to working with Sirisena on implementing his platform of building a "Sri Lanka that is peaceful, inclusive, democratic, and prosperous."