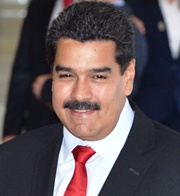 Venezuela, the South American nation that has one of the largest oil reserves in the world, is officially in recession, as the country's economy has contracted for the third quarter in a row, according to latest data released by the country's central bank.

Venezuela's economy has shrunk 2.3 per cent in the third quarter of 2014, after plunging 4.9 per cent in the second quarter and 4.8 per cent in the first quarter. This is the first time the central bank has come out with the gross domestic product (GDP) figures this year. Two consecutive quarters of negative growth indicates a technical recession.

Inflation figures, which were released after a gap of three months, have reached a whopping 63.6 per cent in the 12 months to November making it the highest in the Americas.

Oil revenues account for more than 50 per cent of Venezuela's GDP and over 90 per cent of total exports. The country is the fifth largest member of oil exporting cartel Organisation of Petroleum Exporting Countries (OPEC).

Oil prices fell to a 5-1/2 year low and ended with their second-highest annual slump ever on Wednesday. Brent crude closed at $57.33 a barrel, bouncing off an intra-day low of $55.81.

Export price of Venezuelan oil has dived 50 per cent in the last six months to around $48 a barrel from $96 a barrel. The country's crude is traded at a discount to WTI and Brent crudes due to its high content of heavy oil.

Venezuela's previous recession was during the global financial crisis, when the economy registered a 3.3 per cent GDP contraction in 2009 followed by 1.9 per cent in 2010.

President Nicolas Maduro, who came to power in April 2013 following the demise of his predecessor Hugo Chavez, said the economy was affected by global political instability and falling oil prices.

Maduro's government faced months of public protests led by opposition groups in the first half of 2014 due to shortage of basic essentials such as staples, corn oil and milk.

Maduro blamed the US for flooding market with oil as part of a strategic economic war to destroy the oil exporters like Russia and Venezuela.

"Do you know there is an oil war?'' Maduro said at a meeting with the leaders of state-owned corporations. ''This war is aimed at destroying Russia. This is also a strategically planned war against Venezuela, it seeks to destroy our revolution and trigger economic collapse.''

Critics say Venezuela is maintaining strict currency controls introduced by Chavez in 2002 to rein in capital flight, and blames the government for improper allocation of dollars which pushes up the prices of essential commodities.

The president vowed a number of measures to boost economic growth and control inflation, including spending cuts and reforms to Venezuela's currency control system details of will be disclosed later.

"This economic war, this fall in the oil prices, is a great opportunity for economic change. 2015 is the year of opportunity, for great change in the economic model."