WHO warns of more Ebola deaths as toll rises to over 4,000

The World Health Organisation has raised the death toll due to the Ebola outbreak to 4,033 confirmed, including probable or suspected Ebola deaths, even as the virus spread to countries like Spain. 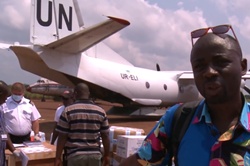 While most of the Ebola deaths were reported from the three worst-affected countries, Liberia, Sierra Leone and Guinea, the Geneva-based UN agency said signs are that the disease is spreading and could turn out to be worse than the dreaded HIV if proper checks are not in place.

Eight of the dead were in Nigeria, with one patient dying in the US and reports now say 16 people were admitted in a Madrid hospital in Spain with signs of Ebola.

While a nurse, Teresa Romero, 44, who was infected with the Ebola virus after working among patients and was returning to Spain remained seriously ill, the rising number of patients with Ebola symptoms has put the Spanish government on the defensive on the way it handled the first case of the disease in the country.

Three people who came into contact with Romero, including a hairdresser, another nurse and a cleaner, were on Friday evening admitted to the isolation unit at the Carlos III hospital.

None of the 16 now being monitored, including Romero's husband, has shown Ebola symptoms.

But, with one death in the US, one seriously ill in Spain and several new cases coming up each day, the outbreak of the disease has raised concerns about a contagion in the West.

As the disquiet in Spain over how the virus could have spread, the government tightened Ebola detection protocols on Friday and put deputy prime minister Soraya Saenz de Santamaria in charge of handling the health crisis, in an attempt to stem an outcry.

Romero was now being treated with ZMab, Spanish media reported.

Meanwhile, in Liberia, lawmakers today rejected a proposal to grant President Ellen Johnson Sirleaf the power to further restrict movement and public gatherings and to confiscate property in the fight against Ebola.

On Friday, David Nabarro, the UN special envoy for Ebola, said the number of Ebola cases is probably doubling every three-to-four weeks and the response needs to be 20 times greater than it was at the beginning.

He warned the UN General Assembly that without the mass mobilisation of the world to support the affected countries in West Africa, ''it will be impossible to get this disease quickly under control, and the world will have to live with the Ebola virus forever.''

Nabarro said the UN knows what needs to be done to catch up to and overtake Ebola's rapid advance ''and together we're going to do it.''

''And our commitment to all of you is to achieve it within a matter of months a few months,'' he said.

India on Friday said it remained committed to cooperating with the international community in the research and development of a vaccine to cure Ebola, assuring its help to the ongoing global efforts to manage the threat.

India's permanent representative to the UN, Asoke Mukerji, told the UN General Assembly that the Indian government has put in place several measures to deal with the possible threat within the country and activated the relevant national disaster response mechanisms to maintain high alert.

He said India had provided immediate financial assistance to three of the affected countries Sierra Leone, Liberia and Guinea for purchase of medical supplies.

It also offered half a million dollars to the World Health Organisation to assist in efforts of the international community to deal with the dire health challenge.

"We believe that the international community must support research and development of a vaccine to cure Ebola, which must be made available especially to the poorest of the poor at realistic prices and India is committed to cooperation to this end. Today, in this hour of need, we stand ready to contribute to the ongoing efforts of the international community to manage this global threat," Mukerji said at a UN General Assembly session on response to the Ebola outbreak on Friday.