Modi ends triumphal US visit with many agreements, but no real deals

Prime Minister Narendra Modi concluded his almost riotous US visit with a ''Thank you America,'' at the end of his final engagement at an event organised by the US-India Business Council (USIBC) on Tuesday. 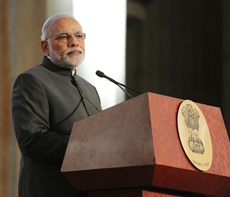 Perhaps he would have been more correct to say ''thank you USA,'' but Canadians and Latin Americans are not as thin-skinned as Indians on such issues.

Modi is on his way back home after what he described as a "hugely successful journey", which included a rock-star style arrival and appearance at Madison Square Garden and a warm reception from President Barack Obama.

In a rare gesture, President Obama joined Modi to pay homage at the Martin Luther King Jr Memorial. Both the leaders took a round of the memorial and Obama was seen explaining significance of the site to Modi.

Both sides agreed to make "joint and concerted efforts" to dismantle safe havens for terror and criminal networks like LeT, JeM, D-company, al Qaeda and Haqqani network. The two countries will take steps to disrupt financial and tactical support to these terror outfits.

Many commentators see the visit as a significant success that has brought the strategic partnership between India and the US back on track; though others are more sceptical – after all his tumultuous reception was almost entirely by persons of Indian origin, and the outward show of bonhomie means little in real terms, as the US is always careful to guard its own interests as it sees them.

The joint statement issued after Tuesday's summit at the White House that lasted nearly two hours listed what some called a 'laundry list' of things they can do together in fields ranging from health and education to space exploration.

But more significantly, Modi secured a commitment from Obama to make joint and concerted efforts to dismantle terrorist safe havens – though again, what it means on the ground remains to be seen.

Modi made it clear that India is not going to join America's battles, including "any coalition" in the fight against Islamic State terrorism in West Asia. A trilateral partnership agreed on Afghanistan would be developmental and not involve military cooperation.

The statement specifically mentioned four Pakistan-based groups - Lashkar-e-Toiba, Jaish-e-Mohammad, Dawood Ibrahim's 'D-Company', and the Haqqanis besides al Qaeda - and also reiterated their call for Pakistan to bring the perpetrators of the November 2008 Mumbai terrorist attack to justice.

There was also no immediate breakthrough on a civil nuclear deal, stalled over India's tough liability laws, but there was some progress.

Modi said, ''We are serious about resolution of issues on both sides to enable civilian nuclear energy cooperation to take off. It is important for India's energy security." An inter-agency contact group will be set up to address the issues of liability, administrative and technical issues. From the Indian side, agencies like the Department of Atomic Energy, ministry of external affairs, and finance ministry will be involved.

Obama said India meets the standards of the Missile Technology Control Regime (MTCR) and is "now ready" for the membership of the elite Nuclear Suppliers Group (NSG), a 48-member body which controls global nuclear trade.

A big booster is an agreement on extending the defence agreement for another 10 years. Modi invited US companies to participate in defence manufacturing sector in India, which has recently raised the FDI cap from 26 to 49 per cent.

Commitment to facilitate the actions necessary to increase bilateral trade five-fold from the current $100 billion. The proposed steps include establishing an Indo-US Investment Initiative an Infrastructure Collaboration Platform. India will welcome two trade missions in 2015 focused on meeting India's infrastructure needs with US technology and services.

Obama and Modi had a candid discussion about WTO issues. "India supports trade facilitation but it is my wish that a solution should take care of our food security concerns.

''I am sure that it is possible to do that early," Modi said. "I am looking forward to building up on relationship and make more progress."

The US reaffirmed support for India's membership of the expanded UN Security Council and backed it for "voice and vote" in international financial institutions like IMF and World Bank.

The US will be the lead partner in developing Allahabad, Ajmer and Vishakapatnam as 'Smart Cities'.

The countries will also cooperate in the Mars Mission.