The perils of Bitcoin as currency

The similarities between bitcoin and the gold standard go beyond the metaphor of ''mining,'' which describes how new bitcoins are dug up with computing power, argues Rahul Singh, ISPS Director's Fellow in Domestic Policy

The largest purchase to date with bitcoin, the decentralized virtual currency, took place on March 20, 2014: a $500,000 villa in Bali. Five days later, the Internal Revenue Service ruled that it would treat bitcoin as property for tax purposes, applying the same rules that it applies to stocks. To put that in perspective, if the anonymous buyer of the $500,000 villa on March 20 paid with bitcoins purchased on February 17-when the exchange rate of dollars per bitcoin was very low-that buyer would have to report and pay tax on a capital gain of $283,333.

Immediate reactions to the announcement vary. To those concerned with security in the Internet Age, the ruling is the first step in monitoring the mysterious, sometimes nefarious activities with which bitcoin is associated. When the FBI busted Silk Road, the ''ebay for drugs,'' in October, it also seized over 26,000 BTC, worth about $3.6 million at the time. To those fascinated by bitcoin as an experiment in monetary freedom, the ruling signals that bitcoin is coming closer to the mainstream-as lawful property now, and hopefully as recognized, nationless currency later. Either way, technology that redefines money is steadily forcing the hands of governments everywhere.

The simplest message in the IRS ruling is the most important: bitcoin remains unrecognized as currency in the US. It was the right decision. To see why, it is helpful to imagine what would happen if bitcoin were a major international currency-to see the parallels between bitcoin and the gold standard, and to recall the havoc wrought by a deflationary monetary system.

The similarities between bitcoin and the gold standard go beyond the metaphor of ''mining,'' which describes how new bitcoins are dug up with computing power. Specifically, both have a deflationary bias; built into to the way they function is a tendency for prices to ultimately fall. Bitcoin is so volatile that economists like Brad DeLong of Berkeley question whether it can even function as a store of value. (Figure 1) So how can there be a definitive trend?

There is another, political reason why both the gold standard and bitcoin are vulnerable to deflation: central banks are powerless to prevent it. In the interwar period, few central banks had the power of open market operations, and discount policy was weak because private banks did not borrow much. Now, that impotence is by design; in the words of the bitcoin website, ''Bitcoin is open-source; its design is public, nobody owns or controls Bitcoin and everyone can take part.'' Bitcoin has no central bank. It is money unfettered by government. 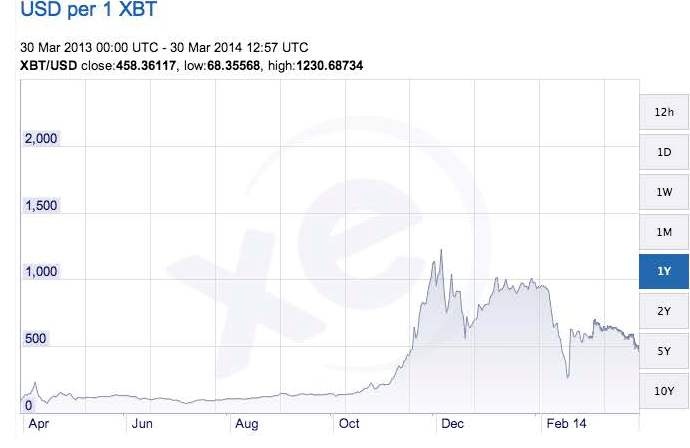 But what is wrong with deflation? Why did Ben Bernanke and Shinzo Abe fight it like their economic nemesis? If the price of the good I want is lower in the future than it is today, I will wait to purchase it. If everyone thinks this way, the economy slows. In addition, falling prices do not translate into falling wages, so deflation means less demand for labor and therefore unemployment. Deflation also implies higher effective interest rates, so less investment and less demand. The last channel is one that should resonate: deflation puts pressure on bank equity, which was one major cause of the Great Depression's banking panics.

Paul Krugman recently wrote, ''It's always important, and always hard, to distinguish positive economics-how things work-from normative economics-how things should be.'' But it should be clear that in the case of bitcoin, how things work does imply how they should be. A crucial lesson from 1925-1936 for 2009-present is the danger of a deflationary monetary system, a lesson that policymakers behind the IRS's recent ruling learned correctly.

Rahul Singh is an ISPS Director's Fellow in Domestic Policy, and a rising senior at Yale studying Economics and Mathematics.