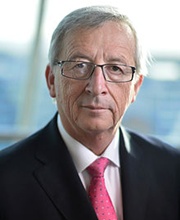 The opposition came from the UK and Hungary.

Juncker has been a constant presence in the continent's modern history and now has a chance to shape its future.

The leader of Luxembourg had been a central player in the creation of the euro and then its defence, even as the sovereign debt crisis threatened to break apart the currency union.

The 59-year old career politician who would need confirmation by the European Parliament, takes over as national leaders seek ways to revive economies in the aftermath of the financial crisis. UK prime minister, David Cameron said the EU needed a new face to lead its renewal.

''I can hardly imagine a better person for the job,'' Finnish prime minister Alexander Stubb said as the summit of EU leaders was getting under way.

Luxembourg has been one of the six founding members of the EU in the 1950s and a proponent of greater integration. According to Cameron, the stance made Junckner, unsuitable for the position at a time when the UK was seeking to scale back the EU's clout through renegotiation.

Cameron said support for the EU in the UK was already 'wafer thin' and would be further undermined by Juncker's coronation. Cameron's Conservative Party has pledged to hold a referundum over EU ties in 2017 if re-elected.

Condemning the EU's new boss as 'the career insider of Brussels' Cameron said Juncker represented 'a big step backwards'. Cameron, who maintains that the UK would remain in a reformed EU said: 'If you want change, is that the type of person you want for the future?'

Warning that the UK faced a  'long campaign' to claw back powers from Brussels, he said, "Frankly, sometimes you have to be ready to lose a battle in order to win a war."

He added, "There are times when it's very important that you stick to your principles ... even if the odds are heavily stacked against you rather than go along with something that you believe is profoundly wrong."

He added, the recent European elections had shown that there was 'huge disquiet about the manner of functioning of the EU.