EU worried as Russia threatens to close gas-supply to Ukraine

Russia has warned Ukraine that it will cut off gas supplies to the former Soviet Union country after 0600 GMT today, after talks on a long-running gas pricing dispute failed. 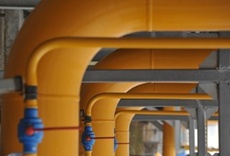 Russian natural gas producer Gazprom said on Saturday it would not extend the deadline for Ukraine to start paying off its gas debts after the discussions ended in the early hours of the morning in Kiev, raising the prospect of disruptions to gas flows to the European Union through Ukraine.

The breakdown of the talks is likely to increase political tensions that have mounted in the past few days between Kiev and Moscow as Ukrainian government forces clashed with pro-Russian separatists in east Ukraine.

The latest in several rounds of talks ended at around 1:30 a.m. (2230 GMT) despite a last-minute attempt by the European Union's energy commission to secure a compromise.

Moscow says Ukraine has a total of more than $4 billion in gas debts and wants almost half that sum paid by 0600 GMT on Monday.

"The Russian side is expecting payment of the accumulated gas debt of $1.951 billion before 10 a.m. (0600 GMT) on June 16," Gazprom spokesman Sergei Kupriyanov said. "If the funds are not paid, gas supplies will, as was announced earlier, be switched to a pre-payment system."

European Energy Commissioner Guenther Oettinger told reporters in Kiev that he had made a compromise proposal during the talks, which resumed late on Sunday, but Moscow had declined the offer. Western countries had seen the talks as a gauge of President Vladimir Putin's willingness to compromise in Russia's political crisis with Ukraine, which has pushed relations with the West to their worst level since the Cold War ended.

But relations deteriorated further last week, with Kiev accusing Moscow of arming the separatists with tanks, protesters attacking Russia's embassy in Kiev and the rebels shooting down a military plane, killing all 49 personnel on board.

Ukraine wants to pay $268.5 per 1,000 cubic meters of gas - the price it had been offered when Yanukovich was in power - but, in a compromise last week, said it would agree to pay $326 for an interim period until a lasting deal was reached.

Moscow had been seeking $485 - the price it reverted to after Yanukovich was toppled - but offered to remove export duty, a move that would reduce the price to $385, around the average amount paid by Russia's European clients.

Russia refused to go any lower at the latest talks, which took place in the Ukrainian government's headquarters after a round of talks in a Kiev hotel on Saturday.

"Such a price is unacceptable for Ukraine and Ukraine will not pay it," said Andriy Kobolev, head of the Ukrainian state gas company, Naftogaz.

Oettinger proposed Kiev pay $1 billion immediately and then make monthly debt payments to Gazprom, while paying $385 per 1,000 cubic meters of gas in winter and around $300 in the summer months.

"Gazprom didn't accept this package, my proposal," he said.

Ukraine's prime minister, who attended the latest talks, had already told the energy sector and local authorities to start preparing for gas cuts and Energy Minister Yuri Prodan said Gazprom had made clear that cuts were a real possibility.

Asked by reporters what would happen when the deadline passed, Prodan said, "You know, the Russian side declared that if there is no advance payment, restrictions will be imposed on gas supplies."

Asked further whether Kiev would try to schedule another meeting before the deadline, he said nothing was planned, but Ukraine was ready for more talks as soon as possible.

The EU gets about a third of its gas needs from Russia and around half of this is received through pipelines that cross Ukraine. It suffered serious disruptions in supplies during an earlier "gas war" in 2009.

In contrast to tropical countries like India, which see peak power demand during the summer months, the impact of gas supply cuts to Ukraine would not initially be huge; but it will peak in the freezing winter months. Ukraine and the EU have enough gas stored to cope with the weaker summer demand, but both would fear cuts in the winter.