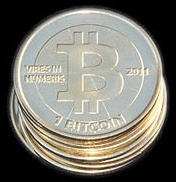 Mt Gox, a popular exchange for dollar-based trades, said in a blog post it needed to ''temporarily pause on all withdrawal requests to obtain a clear technical view of the currency processes.'' It promised an ''update'' -- not a reopening -- on 10 February Japan time.

The Russian prosecutor general added in a statement on its website that following a meeting with the central bank, the Federal Security Service and interior ministry, it had concluded Bitcoin and other digital currencies were illegal under current law.

The statement said Russia's official currency was the rouble, adding, ''the introduction of other currencies and the issue of money surrogates are banned.''

The price of Bitcoin fell over 6.5 per cent to $732.40 in the afternoon New York time, the CoinDesk Bitcoin Price Index, which averages prices from exchanges including Mt Gox said.

SecondMarket Inc, operator of a Bitcoin investment fund for accredited investors, said it would buy Bitcoins, partly in response to the Mt Gox closing.

According to the New York- based company's chief executive officer, Barry Silbert's Twitter message, its trading team would ''make a market on a pilot basis,'' for orders of at least 25 Bitcoins.

According to ANI, the reason for the Russian decision was the alleged use of Bitcoin for money laundering and other criminal activities.

The Russian institution also believed that Bitcoin was a purely speculative currency and that there was a great risk of value losses.

Despite the fact that Bitcoin was a virtual currency and Russians could not be stopped from using it, companies that were based in Russia and working in the Bitcoin industry would have to consider relocating, as they would be falling afoul of the law.

According to the report many countries and official institutions had decided to try and regulate Bitcoin just like Euros and US dollars.

The virtual currency had also been banned by China over laundering concerns.