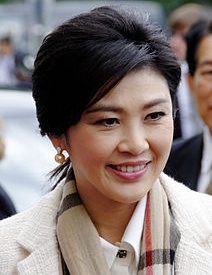 Thai prime minister Yingluck Shinawatra said she was dissolving parliament and would hold snap elections "as soon as possible," after over a month of anti-government protests in the capital, Bangkok.

In a televised address today, she said that she would let the people decide the future of the country.

However, opposition Democratic Party leader Suthep Thaungsuban said he would not end the demonstrations and would continue a march to Yingluck's offices.

According to the police, tens of thousands of protesters were marching on Government House today.

Opposition lawmakers resigned from parliament en masse yesterday as the prime minister said she would call the elections only if protesters seeking her overthrow accepted the results.

Meanwhile, her party said she would run in the new elections.

Opposition leaders, meanwhile, vowed that they would not rest until the prime minister quit and turned over control to an unelected council.

The recent demonstrations have taken a toll of four lives. The demonstrations were triggered by an amnesty bill that would have seen former prime minister Thaksin Shinawatra return home and avoid a two-year jail term for corruption.

Meanwhile, CNN today quoted a government spokesman as saying that Thailand would hold new elections by 2 February, but Yingluck might not be her party's choice to run.

According to spokesman Teerat Ratanasevi, who referred to the ruling party, he did not know whether the Pheu Thai Party would still vote (for) her to run again or not.

Yingluck's move came a day after the country's main opposition party, Democrat Party, said its roughly 150 members would resign en masse from parliament as they could no longer work with the government.

"I don't want our country and the Thai people to suffer from more losses," Yingluck said in a televised address.

But, according to opposition party leader Abhisit Vejjajiva, the massive protests left no choice for the government.

He told CNN that he thought the best way for the prime minister to show responsibility was by returning power to the people.

But Thaugsuban, a former deputy prime minister for the Democrat Party, would not be expected to settle for the steps announced. He has in addition, called for transfer of power to an unelected "people's council."

Thaksin who was ousted in a military coup in 2006, has since spent most of the time in exile overseas, but on return, he would risk a two-year prison sentence on a corruption conviction which, according to him, was politically motivated.