Chinese Premier Li Keqiang today pledged to build trust with India, and declared that ties between the Asian giants were a key to world peace. 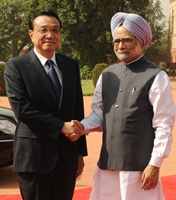 Visiting New Delhi only weeks after a border spat in the Himalaya (See: Chinese troops intrude into eastern Ladakh, set up camp), Li said that his official visit to India is aimed at enhancing mutual trust and deepening bilateral cooperation, and is future-oriented.

Li made the remarks to the press at a welcoming ceremony held by his Indian counterpart Manmohan Singh in his honour at the Presidential residence on Raisina Hill.

"This is my first foreign trip since I assumed the premiership, and choosing India as the first leg of my tour is because India is China's important neighbour and also because I once visited India 27 years ago," Li said.

He arrived in New Delhi on Sunday afternoon and had a brief meeting with Singh.

Speaking alongside Prime Minister Singh, Li said China wanted to increase cooperation with India, saying his choice of destination for his first foreign visit showed the importance that Beijing attached to ties with Delhi.

"The purpose of my current visit to India is three-fold - to increase mutual trust, to intensify cooperation and to face the future," Li said.

"On the basis of deeper mutual trust, our two countries can further deepen our mutual understanding and construct a new type of relations between major countries, promote healthy and sound development of China and India.

"That will be a true blessing for Asia and the world."

Li's visit comes after a flare-up last month in a long-running border dispute between the two countries in a remote Himalayan region.

New Delhi accused Chinese troops of intruding nearly 20 km into the Indian side of the Line of Actual Control (LAC), the de facto border between the two countries, triggering a three-week standoff that was resolved when troops from both sides pulled back.

The LAC has never been formally demarcated, although the two sides have signed accords to maintain peace in the region that was a site of the Indo-Chinese war in 1962.

Although Li did not mention the border dispute, he stressed that cooperation between the world's two most populous nations had global ramifications.

"World peace... cannot be a reality without strategic trust between India and China," he said.

After the initial talks with Singh on Sunday evening, the two held more detailed discussions today.

The border dispute almost led Khurshid to cancel a visit to Beijing before the pullback agreement, despite his insistence that the row should not serve to "destroy" recent diplomatic progress.

Tibetan protests in New Delhi
Several major roads in the Indian capital have been closed to prevent Tibetan protestors from disrupting the visit, while exile groups complained of heavy-handed policing in their neighbourhoods.

"The police have denied us permission to protest in New Delhi and police deployment in Tibetan resident areas has been intensified. They are not allowing young Tibetans to walk in groups," said Tsering Choedup, a regional coordinator for the International Tibet Network.

After wrapping up his visit to India, Li is due to travel to neighbouring Pakistan before heading to Switzerland and Germany.