The International Monetary Fund (IMF) says there will be no long-term impact on the Japanese economy from the triple strike of an earthquake, a tsunami and a nuclear accident. Officials said that though there may be a short term drop, the economy was strong enough to afford the cost of rebuilding itself. 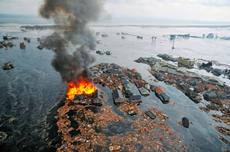 The IMF warned that restoration of electricity supply and government reconstruction spending would be crucial to kick-start growth.

For the first time since World War II the government has introduced rolling power cuts. This has affected manufacturing adversely.

After registering growth of 3.9% for the whole of 2010, recent figures released by Japan's Cabinet Office show that the country's economy contracted by 1.3% in the last three months of the year.

The Japanese government estimates rebuilding cost after the 11 March earthquake at $309bn.

Japanese government estimates the damage to be double that caused by the 1995 Kobe earthquake, but IMF officials say they think the country was strong enough to cope.

IMF officials point to the high level of domestic savings in Japan and say this pool of savings was sufficient to finance its own reconstruction needs.

Caught in a deflationary cycle for a long time the economy may show some change as shortages of food and drinks caused by the earthquake, and subsequent nuclear contamination, may push up prices.