When Karl Marx - credited with having given the world the idea of communism - wrote his famous Das Kapital, in 1867, little would he have imagined that the execesses of capitalism would turn his book into a bestseller 130 years later. 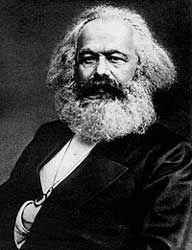 Das Kapital, which till now could only to found largely in libraries and old second-hand bookstores, is suddenly seeing robust sales most notably in Germany where people are seeking solace in the words of their countryman amid the financial crisis in which banks are crashing and the capitalist world order seems to be disintegrating.

A small academic publisher, however, is delighted with the surging sales of the book, which till last year never sold over 200 copies a year.

Publishers in Germany are witnessing resurgent sales of the book and reporting a quadrupling of orders.

One particular publisher the Berlin-based publisher Karl-Dietz Verlag has sold 1,500 copies of Marx's Das Kapital this year and 200 copies in one month, as many as it used to sell in a year.