Leaders of member countries of BIMSTEC at the fourth summit in Katmandu, Nepal, adopted sustainable development as the agenda for 203, acknowledging that enhanced inter-linkages and inter-dependence within the economies and societies in the grouping provide greater opportunity to advance regional cooperation. 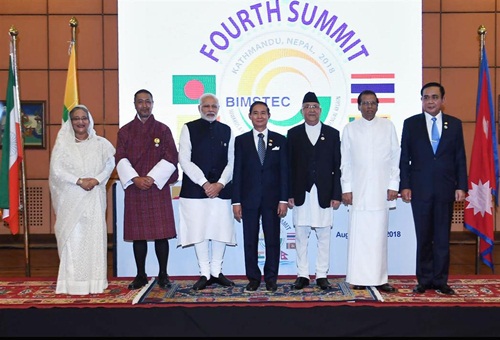 They also reaffirmed their firm commitment to the principles and purposes of BIMSTEC as enshrined in the 1997 Bangkok Declaration;
Recalling the third BIMSTEC summit declaration made at Nay Pyi Taw on 4 March 2014 and the BIMSTEC Leaders’ Retreat Outcome Document at Goa on 16 October 2016, they affirmed their commitment to making the Bay of Bengal Region peaceful, prosperous and sustainable by building on common strengths through collective efforts.
ThE BIMSTEC declaration took note of the geographical contiguity, abundant natural and human resources, rich historical linkages and cultural heritage, which  present great potential for promoting deeper cooperation in identified core areas in the region.
Recognising that eradication of poverty is the greatest regional challenge in the realisation of development objectives and expressing firm commitment to working together for the implementation of the `Agenda 2030 for Sustainable Development’ the declaration also acknowledged the need for enhanced inter-linkages and inter-dependence within the economies and societies in the BIMSTEC member states to provide greater opportunity to advance regional cooperation - a key enabler to economic integration for shared prosperity.
The leaders also decided to foster regional trade, which is one of the major contributing factors for fostering economic and social development in the region. To this end, they also decided to provide support to least developed and land-locked developing countries in the region.
The declaration also decried the menace of terrorism and transnational organized crimes that continues to pose a great threat to international peace and security, including in the BIMSTEC countries, and stressed the need for combating terrorism and transnational organised crimes through sustained efforts and cooperation.
The declaration reaffirmed strong commitment to making BIMSTEC a dynamic, effective and result-oriented regional organisation for promoting a peaceful, prosperous and sustainable Bay of Bengal Region through meaningful cooperation and deeper integration.
Stressing the need for a fair, just, rule-based, equitable and transparent international order and reaffirming faith in the multilateralism with the United Nations at the centre and the rule-based international trading system, the declaration underscored the importance of robust institutional arrangements to effectively steer the process of regional cooperation under BIMSTEC.
The declaration was signed by prime minister of Bangladesh, the chief advisor of the Kingdom of Bhutan, prime minister of India, President of Myanmar, the prime minister of Nepal, President of Sri Lanka, and the prime minister of Thailand.
MORE REPORTS