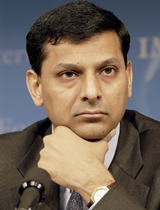 Banks should be careful about excessive lending to the infrastructure sector, since many of them already have too much exposure there, Reserve Bank of India governor Raghuram Rajan said today.

He said the need to lend to the infrastructure should be balanced against overall financial stability, which is a ''key to national security''.

''The nation has enormous financing needs in infrastructure, and far too many of our banks already have too much exposure. Big corporate infrastructure players have also taken too much debt,'' Rajan said at a function in Mumbai to mark 80 years of RBI, in the presence of Prime Minister Narendra Modi and finance minister Arun Jaitley.

''The required national push to finance infrastructure should not override financial stability, which is a key to national security,'' he added.

The non-performing assets (NPAs) of banks in the country added up to over Rs3 lakh crore as on 31 December 2014.

Banks had to tide over a tough time when the power sector was hit by the Supreme Court's judgment last year cancelling allocation of 204 coal mines by the previous government.

The finance minister, while pushing for investments in infrastructure in his budget for 2015-16, had proposed a sizeable Rs70,000 crore increase for the sector besides a slew of steps to spur its growth.

The 12th five-year plan (2012-17) envisions an investment of $1 trillion in the infrastructure sector, with half expected to come from the private sector.

Listing infrastructure among five major challenges he has to reckon with, Jaitley had said that it is a challenge for government to increase investment in the sector.

With private investment in infrastructure via the PPP model still weak, public investment needs to step in, to catalyse investment, he had said.

Rajan said there has always been a ''constructive dialogue'' between RBI and the government, and underscored the need to nurture strong institutions like the central bank.

''Strong national institutions are hard to build. Therefore existing ones should be nurtured from the outside, and constantly rejuvenated from the inside, for there are precious few of them,'' he said.

The comments from the governor come in wake of a new set of reports indicating differences between Mint Street and North Block following certain budget proposals indicating moving away certain functions from RBI including regulation of government debt and public debt management.