Monsoon rains in India could be below normal in 2015: IMD

India's Southwestern monsoon rains could be below the long-term average in 2015 due to the impact of the El Nino weather pattern, with the likelihood of dry spells, the India Meteorological Department said today. 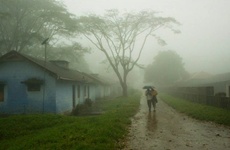 A persistent El Nino weather pattern could cause long spells of dry weather as in 2009, when the monsoon season turned the driest in nearly four decades, the weather office said.

Monsoon rains this season are expected to be 93 per cent of a long-term average, minister for earth sciences Harsh Vardhan said after releasing the forecast of the weather office.

Normal or average rainfall in India, according to the IMD, is estimated between 96 per cent and 104 per cent of a 50-year average of 89 cm for the entire four-month (June to September) season.

''The experimental forecast based on the coupled dynamical model forecasting system suggest that the monsoon rainfall during the 2015 monsoon season  averaged over the country as a whole is likely to be 91± 5 per cent of long period model average (LPMA),'' IMD said in a release.

Indian Institute of Tropical Meteorology (IITM), Pune, which is under Earth System Science Organisation (ESSO), is coordinating and working along with different climate research centers from India and abroad on the development of a coupled model for the forecasting of Indian summer monsoon rainfall under ESSO's Monsoon Mission project.

As per the ESSO-IMD's operational long range forecast for the 2015 Southwest monsoon rainfall, quantitatively, the monsoon seasonal rainfall is likely to be 93 per cent of the Long Period Average (LPA) with a model error of ± 5 per cent. The LPA of the seasonal rainfall over the country as a whole for the 50-year period from 1951 to 2000 is 89 cm.

The forecast of below average rainfall across the country raises concerns over the prospects for major summer crops such as rice, sugarcane, soybean and cotton, of which the country is a key global producer.