Food Corporation of India (FCI) seems to have no solution for its foodgrain stacking operations that cost a fortune as its lakhpati loaders continue to bleed the corporation dry with proxy labour. 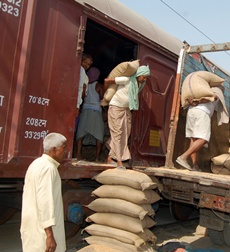 The latest report by the Comptroller General of India (CAG), in October 2015 there were 61 labourers in FCI's various godowns who earned more than Rs2,00,000 a month in incentives with three among these loaders earning over three lakh in monthly

Multiple agencies and numerous management studies later, these loaders continue to draw lakhs in monthly remuneration merely for loading grain sacks despite several initiatives to end the drain on FCI's finances, says the latest report by the Comptroller and Auditor General (CAG) of India.

The latest report by the CAG shows that between January and March 2016, labourers ostensibly suffering from chronic ailments like paralysis, heart and kidney diseases at some depots of the northern region earned incentives and overtime anywhere between Rs90,836 and Rs305,311!

CAG first struck the lakhpati loader at FCI's Dimapur depot, which forced the government auditor to look elsewhere as well, which led to the tracing of 61 instances of labourers earning unheard-of  remuneration and the use of proxy labour.

While the proxy may be a labourer, the beneficiary need not be labor and this could be a means by the higherups to siphon off money from the corporation, say sources.

While this has been a drain on FCI's finances for decades, the government has done precious little to curb it except for some study and submission of reports.

The existing norm at FCI depots is 105 bags per day per loader but at Dimapur, CAG found that 97 'departmental labour' handled over 66 lakh excess bags between April and December 2015. Over and above the 105 bags per person norm.

CAG found each loader handling anywhere between 998 and 1,776 bags per day – against the norm of just 105 bags.

In a written reply in Lok Sabha earlier this month, minister for consumer affairs, food and public distribution Ram Vilas Paswan said a high-level committee had recommended capping the recommendation of labour. However, he said it could not be capped since it would lead to delay in unloading at the railheads.

A committee headed by former  union minister Shanta Kumar had observed in 2015 that there was huge disparity in wages of various kind of labour force engaged by FCI and had recommended fixing this.

This must be fixed, either by de-notifying these depots or handing them over to states or private sector on service contracts and by fixing a maximum limit on the incentives per person that will not allow him to work for more than say 1.25 times the work agreed with him.''

FCI loaders are categorized into four categories with varying degrees of incentives:

The CAG has found numerous instances of fraudulent labour practices at FCI. It has suggested a polling of departmental labour in fewer depots and use of contract labour elsewhere.